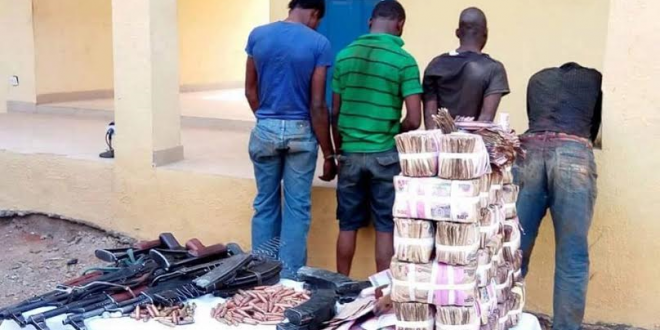 The police in Osun State said they arrested four suspected members of the robbery gang which raided some commercial banks in Ikirun on Friday.

TThe Commissioner of Police, Mr. Kola Sodipo, said this in a statement issued on Saturday.

He said the command lost two of its policemen during a gun duel with members of the gang who had earlier killed two officials of the banks they raided.

The CP said the police recovered N7.5 million as well as arms and ammunition from the gang after engaging them in a fierce gun battle. 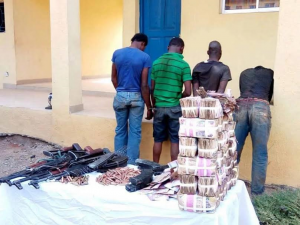 He gave the names of the suspects as Aderibigbe Oluwaseun, 23, Ndubusi David, 21, Ayuba Salisu, 26 and Nuhu Jimoh, 21.

The CP said the armoured personnel carriers provided by the Osun State Government assisted the police to engage the hoodlums.

Sodipo, said the two bank officials killed by the robbers during the operation were the first target of the robbers on arrival.

A gang of armed robbers had invaded Skye Bank, First Bank and Union Bank branches in Ikirun on Friday evening.

The police boss, who said the swift response by the police foiled the robbery operation, noted that four of the robbers were killed while four were arrested.

“It would be recalled that on Feb. 12, at 15:45 hour, a distress call was received that men suspected to be armed robbers invaded Skye Bank, First Bank and Union Bank located on the same street in Ikirun.

“Swift response by the police repelled the attack,” he said.

Sodipo said that one standby Nissan sunny car which robbers wanted to use for escape was also recovered.

He said that he had visited the venue of the robbery for on the spot assessment with his bomb disposal unit to sweep the affected area and to detect and recover undetonated improvised Explosive Devices.

“A diligent investigation is ongoing for the arrest of other syndicate members,” Sodipo said.

Share
Previous Anti-Corruption Drive: Buhari Should Start From Obasanjo-Fayose….. Says FG Is Clueless On Economy
Next I Was Promised N300,000 To Blackmail Abiara, 11 Other Pastors, Ex-convict Confesses Read more at: htt