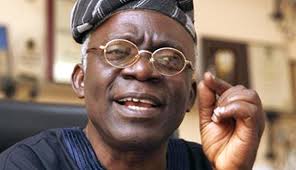 The Lagos State Attorney General and Commissioner for Justice, Mr. Adeniji Kazeem had stated during the inauguration  of the Mobile Court, that the development was one of the ways through which Governor Ambode aims to broaden the pathway that guaranty citizens’ access to justice and at the same time ensure the preservation of civility in the society.

Speaking to reporters shortly after the inauguration, Falana said the action of the Governor was a progressive development which would enforce discipline and sanity on Lagos roads, as well as the environment.

According to Falana, “It is a progressive development. I have just advised the Attorney General that we would not allow the police and the traffic officials to detain people illegally but I have been assured that the penalty for most of the traffic offences shall be community service which I think is a very progressive development. That is going to enforce discipline on our roads and sanity to the system.”

Also speaking, Chairman of Lagos State House of Assembly Committee on Judiciary, Human Rights and Public Petition, Hon. Adefunmilayo Tejuosho commended Governor Ambode over the move, saying such would go a long way in positively impacting on the drive of government to decongest the prisons.

She said: “This is a welcome development. You know Lagos State is definitely the centre of excellence; we put things in motion and other states follow. We have to appreciate the Governor of Lagos State, Mr. Akinwunmi Ambode; the Ministry of Justice, the Judiciary and also the House of Assembly for cooperation because to move the state forward, we have to work together as a unit.

“It is good that at the point of the incidence when somebody commits traffic offence, it can be handled immediately. You know a lot of times they say that a lot of awaiting trials are in the prisons detained and we are trying to decongest those areas and this is a good way of doing that and getting justice at the same time.

“You know as they say, justice delayed is justice denied and we are trying to do everything quickly so that whoever commits an offence will not have an excuse to say that he is being detained unjustly and so on,” Tejuosho said.

The lawmaker, who is representing Mushin Constituency 1, added that the establishment of the Mobile Court would make the people to be more careful and obey the laws of the land.

According to Tejuosho “Sometimes when you put a stick and you have a dog that wants to do something wrong, if it knows that the stick is something to punish it, the dog will not do it. So, it also will deter people from committing offences when they know there is a Mobile Court that will actually dispense justice quickly; people will be more careful and Nigeria and Lagos State especially will be a safer place for us all.”