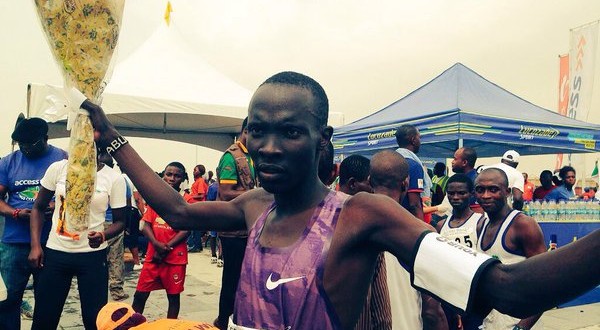 He told the News Agency of Nigeria (NAN) at Eko Atlantic City, the finish point of the event that he was happy he won the race with a time of 2:16:20.

Kiptom said people were expecting Kiplaglat to win, but that the weather also worked in his favour. “The race was not bad, I am happy I won the race and surprised people who thought my compatriot will win,’’ he said.

The overall first female marathoner is Halima Hussain of Ethiopia, came first with 2:38:36 and Alice Timbul of Kenya came second with a time of 2:38:49. Aberash Fetase of Ethiopia returned 2:39:09 to place third.

The first marathoner went home with 50,000 dollars, the second place winner carted home 40,000 dollars and third place 30,000 dollars. The News Agency of Nigeria (NAN) reports that the race began at the National Stadium, Surulere Lagos at 7.10 a. m., with no fewer than 20,000 marathoners. The race went through the Ikorodu road to link Oworonsoki, then passed through the Third Mainland Bridge and linked Victoria Island to the end point at Eko Atlantic City.