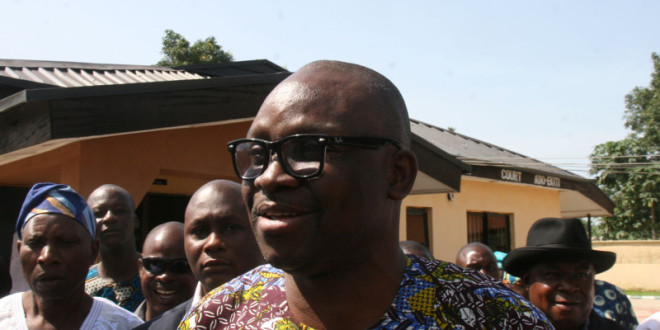 Prosecute Fayose, others for rigging-Ekiti APC

February 2, 2016 Comments Off on Prosecute Fayose, others for rigging-Ekiti APC 15 Views 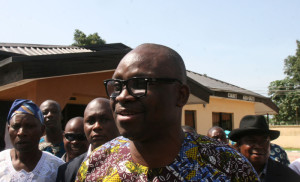 The All Progressives Congress in Ekiti State has again urged the Attorney General and Minister of Justice, Abubakar Malami (SAN), to prosecute all indicted people in the June 21, 2014 Ekiti governorship election rigging scandal.

The party said it had on two occasions petitioned the Office of the Attorney General and Minister of Justice on the same matter, stressing that the latest revelations had made it imperative for the nation’s chief law officer to act.

The Ekiti APC Publicity Secretary, Taiwo Olatunbosun, noted in a statement on Monday that the election fraud story had refused to go away despite all “shenanigans” by Governor Ayodele Fayose, who he said was the biggest beneficiary of the fraud.

According to him, the soldiers should not be made to suffer alone for the alleged crime committed with Fayose and others in the PDP who are still walking free.

He also revealed how the PDP rigged the governorship election for Fayose.

But the APC spokesman said even though there was nothing new in the revelations, it had become pertinent to prosecute the suspects as the revelations were again emanating from an insider who participated fully in what is now known as Ekitigate.

Olatubosun said, “By Aluko’s revelations, we are justified in our claim that our candidate, Dr. Kayode Fayemi, never lost that election but was criminally toppled by a coup d’etat orchestrated by Fayose in cahoots with President Jonathan’s administration that illegally deployed money and the military to ensure victory for Fayose.

“It is interesting that more names are coming up in the biggest election scam ever witnessed in Nigeria with the alleged participation of Ifeanyi Ubah of the infamous Transformation Agenda for Nigeria, a shady campaign group of former President Jonathan. No wonder Ubah was compensated with an honorary fellow award by Fayose at the Ekiti State College of Education for a job well done.”

The APC said President Muhammadu Buhari should use the Ekiti election fraud case to convince Nigerians that official impunity and fraud would not have a place in Nigeria under his watch.

“We have seen the army tackle the military aspect of the Army Probe Panel report. We expect the police and the AGF to also toe the same path in coming out with the civilian component of the probe report and act accordingly.”

Olatunbosun urged Nigerians to prevail on the minister of justice to compel Fayose to explain to the world what he meant by saying that he collected INEC soft copies and got them printed as captured in Capt. Sagir Koli’s tape detailing all activities connected with the Ekiti rigging.

“Besides Fayose talking on the tape about how INEC gave him soft copies that he printed to win the election, the minister of justice must also compel the governor, who spoke on election result collation in the tape, to tell Nigerians which election result he was collating in Efon-Alaaye on June 19, 2014, two clear days before the June 21, 2014 governorship election,” Olatunbosun added.

Meanwhile, a former Lagos State Commissioner for Police, Alhaji Abubakar Tsav, and the South-East Zonal Spokesman for the APC, Mr. Osita Okechukwu, have called for the arrest and prosecution of all those involved in the rigging of the Ekiti election.

The two men, who spoke in separate telephone interviews on Monday, described the revelations about the rigging of the election in question as a good development.

Tsav noted that the revelation was good for the country’s democracy in the sense that it now shows that no crime can go undetected forever. This, he noted, would send a clear signal to all those who have plans to replicate such infamy to have a rethink.

According to him, the revelation will also assist Nigerians to be more vigilant in subsequent elections with a view to ensuring that they not only vote but that their votes count.

He said, “Without a doubt, these (revelations) show that the no-nonsense disposition of President Buhari to issues of impunity and corruption is beginning to yield fruits because people now come up with revelations that will help improve the electoral system.