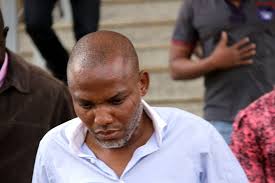 A Federal High Court in Abuja has turned down a bail request by the detained leader of the Indigenous People of Biafra, (IPOB), Nnamdi Kanu.

The court said on Friday that Mr. Kanu must remain in prison pending his trial for alleged treason.

Kanu has been in detention since his arrest in October over his involvement in the agitation for the creation of the State of Biafra.

Amongst the accusations levelled against jim by the government includes the of running an underground radio that spreads hate messages in a push for the creation of independent state of Biafra and the soliciting of arms from other countries.

He had earlier been granted bail twice by the courts, but the government refused to release him.