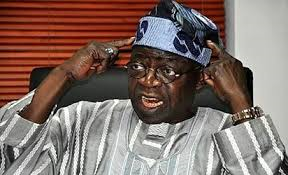 Be Patient With Buhari,Tinubu Pleads With Nigerians

January 25, 2016 Comments Off on Be Patient With Buhari,Tinubu Pleads With Nigerians 19 Views

National leader of the All Progressives Congress (APC),Asiwaju Bola Ahmed Tinubu has urged pleaded with Nigerians to be more patient with President Muhammadu Buhari as he attempts to turn around the economic fortunes of the country in light of the sharp decline in global oil prices.

The former governor of lagos state made this disclosure, Sunday during his condolence visit to the family of the late Olubadan of Ibadan, Samuel Odungade. According to Tinubu, both the government and the citizens need to look inwards and adopt a more creative stance in the bid to turn around the economic fortunes of the country. “We are not the only country that is affected by the effect of this oil crisis. We have to be more creative in a way that will not hurt the welfare of the people

“The past is nauseating, terrible. There has never been any principle of good governance in the past. It has been cesspool of corruption”

He noted that this period is not as difficult as what most Nigerians think it is “There is a gestation, rearrangement and re-engineering necessary for the economy to be beneficial to the people. We must be patient, we must persevere and the leadership must be creative in order to rejuvenate the economy. Just bear with us.”

Tinubu also urged the President Muhammadu Buhari and his government to look at more ways of diversifying the nation’s economy saying the variables in the oil sector are to undergo more critical look.

Tinubu was accompanied to the late Olubadan’s Palace  by the governor of Oyo state Abiola Ajimobi, Speaker of the state House of Assembly; Michael Adeyemo, former interim chairman of the APC , Chief Bisi Akande, and the, national vice-chairman, south-west of the party Pius Akinyelure,.