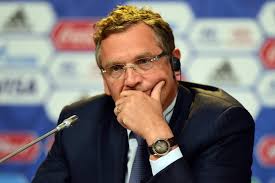 The Frenchman, 55, was provisionally suspended from football for his alleged involvement in a scheme to profit from the sale of World Cup tickets.

He was released from his duties on 17 September after being accused of a series of Fifa ethics code breaches.
Appointed in 2007, the former right-hand man of Fifa president Sepp Blatter has denied any wrongdoing.

“The duties of the secretary general will continue to be assumed by the acting secretary general, Dr Markus Kattner,” read a Fifa statement.
Fifa’s ethics committee said on 7 January that it had decided to open “formal adjudicatory proceedings” against Valcke after studying a report submitted by its investigatory chamber.

Valcke has also been accused of being party to a potential £6.8m ($10m) bribe paid to Jack Warner, the former head of the North and Central America football governing body Concacaf, in return for his vote and backing to South Africa’s successful bid to host the 2010 World Cup.

Fifa’s ethics committee has already recommended that Valcke should be banned from all footballing activities for nine years.
Blatter and vice-president Michel Platini were both suspended for eight years in December following a Fifa ethics investigation.
Valcke has now been sacked twice by Fifa.

He joined the organisation in 2003 as director of marketing and TV, but was dismissed in 2006 over a scandal involving its long-time sponsorship partner Mastercard.

He was found to have negotiated with Mastercard’s rival Visa in violation of the former company’s right of first negotiation, which cost Fifa $90m (£61.3m) in a settlement.