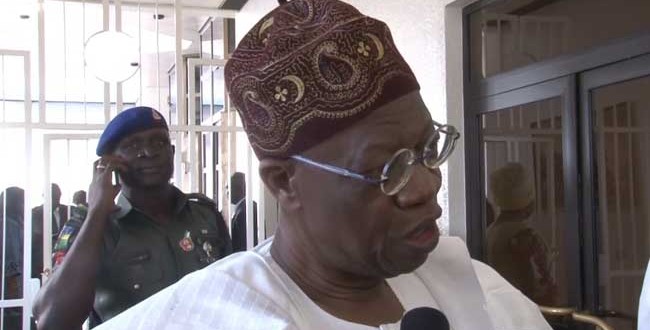 January 7, 2016 Comments Off on FG Not Dictating To EFCC- Lai Mohammed 13 Views

The Minister of Information and Culture, Mr Lai Mohammed on Wednesday said the Federal Government is not dictating to the Economic and Financial Crimes Commission(EFCC) on how to carry out its operations.

Mr. Mohammed spoke on Wednesday while responding to questions from State House correspondents on the arrest of PDP National Publicity Secretary, Olisa Metuh by EFCC

The Minister said the proper thing to do as Journalists is to carry out their own independent investigation to authenticate such allegations are true or false.

“I think the first point to make is that this government is not micro-managing any of the anti-graft agencies. I know for a fact that they don’t contact the President or anybody before they do their job.

“I think the media also has to do more than they are doing right now, they should investigate these allegations and also make their independent judgment about it.

“Honestly, if the EFCC or ICPC says that they are able to trace certain amount of money to my account, I don’t want you to believe it, I want you to also ask for proof; do your investigation.

“I can assure you that this government, no functionary in government micromanages or directs the EFCC or ICPC on who to arrest and who not to arrest”, he said.
.
The Economic and Financial Crimes Commission(EFCC) arrested the PDP spokesman, Olisa Metuh on Tuesday morning after the sum of N1.4bn was traced to his account which is suspected to be from the $2.1bn arms gate.