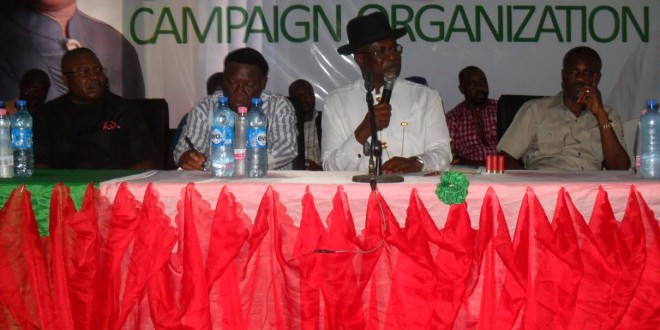 Ahead of the Saturday, 9 January 2016 supplementary governorship election in Bayelsa State, the governorship candidate of the All Progressives Congress (APC) and former governor of the state, Chief Timipre Sylva, has expressed confidence that he would sweep the poll. Sylva stated this on Wednesday at a crowded press conference held at the headquarters of the Sylva-Igiri Campaign Organisation in Yenagoa.

He said APC was poised to win the 5 December 2015 governorship election, when, according to him, it was substantially, illegally, and unilaterally cancelled by the Resident Electoral Commissioner (REC) Mr. Baritor Kpaigh, and declared inconclusive.

The APC candidate said the cancellation was procured by the Peoples Democratic Party (PDP) and its candidate, Governor Seriake Dickson. In spite of this, he said the APC was willing and ready to participate in the rescheduled 9 January 2016 supplementary election.

He said the APC was sure to win the poll because the exercise would take place in the party’s strongholds.

The press conference was held in reaction to Dickson’s vituperations two days before, when he accused APC and Sylva of violence.

Sylva said, “I am a man of peace. I have never been involved in violence. I am the author of the peace project not only in Bayelsa, but in the whole of the Niger Delta. I brought peace to the Niger Delta through the initiative of the amnesty programme, when militancy was at its peak in the region. Everybody knows this.

“Throughout my tenure in government, I was never involved in violence.

“Dickson has shown so much desperation, even when he says he is winning. He says there were killings, but he has not shown anybody any evidence of a dead body. Only Dickson knows about the violence he is talking about.

“Yes, there was violence during the elections, but this violence was perpetrated by Dickson and the PDP. I was, myself, attacked at Odioma on the eve of the election on my way to my hometown, Okpoama in Brass Local Government. The home of the Minister of State for Agriculture and Rural Development, Senator Heineken Lokpobiri, who is also the director-general of my campaign organisation, was attacked. It took the JTF to rescue him. My supporters were attacked in Sagbama, they were attacked in Nembe. All these violence were perpetrated by PDP; APC could not have attacked its members.
“Governor Dickson has been the author of violence. I have evidence of extra-judicial killings under his watch. I can give names of victims. He went on to accuse me of political violence when he is the author of political violence and intolerance.

“Governor Dickson is crying so loud and yet he is the aggressor.”

To buttress his point, Sylva showed journalists at the press briefing the brutality visited on one of his agents in Dickson’s native Sagbama Local Government Area, Lucky Youbogha, who had a bandaged broken arm supported with splints.

The APC candidate said, “Dickson talks about federal might, but this federal might exists only in the head of Mr. Dickson. He is aware that the police outfit attached to him, Operation Doo Akpo was used to snatch ballot boxes and intimidate voters in his favour.

“Dickson claims to be the ‘winner’, yet he is complaining more than the ‘loser’.

“In a free and fair election, I will beat Governor Dickson any day. The PDP and Dickson are not prepared for elections in Southern Ijaw Local Government Area. It is very clear. Anything that happens in Southern Ijaw local government, the blame should be put on Dickson.
“Dickson looks like a warmonger. He is a warmonger governor; he is a very violent human being.”
Sylva stated that Dickson’s lead at the 5 and 6 December 2015 elections were “procured by violence,” stressing that every Bayelsan knows he would defeat Dickson in a free and fair poll.
The APC candidate called on the security agencies to watch Dickson ahead of the 9 January election, as he was planning to unleash militants on the state to cause violence and manipulate the voting process.
According to Sylva, “Because the PDP government knows that the APC is set to upturn such unfair means and win our strongholds, they have started making false claims. Because the PDP government is on his way out, they have put together a plot to perpetuate violence in Southern Ijaw Local Government Area.
“The antecedents of the PDP candidate, Governor Seriake Dickson, have shown that his desperate accusations against the APC are actually a plot in motion.”
Sylva explained Dickson’s violent disposition to the electoral process as a function of the way he came into office in 2012 through open violence and crude manipulation funded and supervised by former President Goodluck Jonathan.
“He knows how he became governor with impunity. And he is thinking the APC will deploy the same might under President Buhari. The APC government cannot do that,” Sylva stated regarding Dickson.
Sylva expressed confidence in the new leadership of the Independent National Electoral Commission in Abuja, saying that leadership is credible. But he said INEC in Bayelsa State was constituted by the PDP and structured in a way to deliver only the PDP, stressing that the INEC in Bayelsa needs to be restructured.