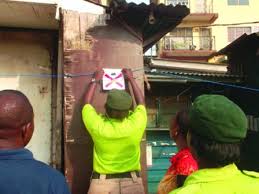 The Lagos State Government said on Monday in Lagos that it had begun to seal off houses without standard toilets.

Mr Oluwatoyin Awosika, the Director of Public Enlightenment in the state’s Ministry of Information and Strategy, told the News Agency of Nigeria (NAN) that the closure of the houses was to check “unwholesome practices” such as open defecation.

According to him, the government is also embarking on public enlightenment to educate residents on the dangers of open defecation.

• Cue in audio
“We would continue to educate people on the need to stop open defecation.

“Again, you don’t blame some of these people for doing these things, so many houses don’t have toilets.

“So many houses don’t have bathrooms, so naturally, you find these people doing it outside.

“Government cannot take all landlords and start inspecting all the houses, but the Ministry of Health, “Wole, Wole’’ Inspection Officers, the houses they go and they find that there are no toilets, they seal them up.

“That is an ongoing thing; their own is just to go round the environment, enter any residential or official premises, inspect; once they see any defect, they give them an ultimatum to put such things into practice.

“And once they are not done, they are sanctioned according to the law.

“The environmental law is clear, every house must have a standard kitchen, standard toilet, standard bathroom, they must have proper drainages around the house and water system.

“The education is endless, we do our own, the health officers do theirs; the Lagos State Environmental and Special Offences Office do education.

• Cue out audio
He stated that the state government is working closely with several non-government organisations with a view to changing the attitude of residents towards open defaecation. (NAN)

Share
Previous “We Strongly Condemn All Kinds of Improper Conduct”- Headies Blasts Olamide
Next Obaigbena: There Is No Nexus Between Arms Budget And Payment Of Compensation