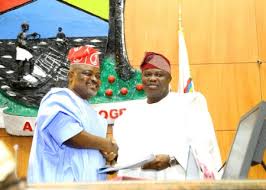 The Lagos State House of Assembly on Thursday passed into law the N662.588bn Year 2016 Appropriation Bill presented by the State Governor, Mr. Akinwunmi Ambode on December 17, 2015.

The Appropriation Bill, tagged “The Peoples Budget,” is the highest in the history of the State and it was an improvement on the N489.69bn appropriated for year 2014 and 2015 respectively.

The House unanimously approved the budget after members deliberated on the report of House Committee on Budget which scrutinized the Bill as proposed by the Governor.

The report was presented by Chairman of the House Committee on Budget, Hon. Rotimi Olowo on behalf of members of the Committee.

Speaker of the House, Rt. Hon. Mudashiru Obasa, in response, commended members of the Committee for expeditiously working on the budget to ensure its passage before the new fiscal year.

Obasa recalled that members of the Committee worked even on holidays, adding that they had indeed shown their love for the people of the State.
Governor Ambode had, while presenting the budget, put the Recurrent Expenditure at N278,909bn while Capital Expenditure stood at N383,678bn, explaining that the Capital to Recurrent ratio is 58:42 as against 51:49 in 2014 and 2015.

Governor Ambode said that due to the falling oil prices, the budget is pegged on $38 dollar per barrel, saying it was in line to maintain a conservative approach in estimating the Federal allocation for 2016.

“This programme promises not only to improve the daily nutrition of our children, it will also create an economy of its own, with opportunities for job creation, income generation, poverty alleviation, and so on”.

“I am happy to inform you that in 2016 we will develop our e-Curriculum, leading to the distribution of Ibile Tablets to students in our public schools. This revolution, at the Secondary School level, will set a new standard in our educational system, and further enhance the knowledge of our children to enable them compete effectively with their peers in developed countries”, the Governor said.

On security, Governor Ambode while acknowledging that it was a major challenge that confronted the state within the first few months of his administration, said the government adopted a multifaceted approach at tackling this challenge, just as he pledged to continue to support the security agencies in 2016.

On road infrastructure, the Governor said one of the assignments that his administration had embarked upon is to regularly inspect the state of the roads to ascertain their conditions and ensure that they are motorable, assuring that while ongoing projects will be given priority in the course of the year, new roads will be constructed across the length and breadth of the state.

On transportation, Governor Ambode said: “The plan in Year 2016 is to fully operationalise our multi-modal transport system through the construction of new jetties and completion of works on the Blue-Rail line project from Mile 2 to Marina. We will deliver this project in Year 2016.”