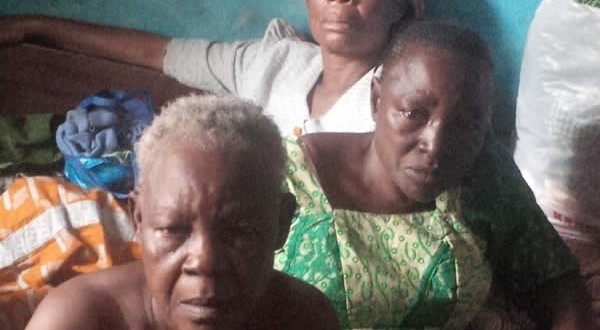 December 28, 2015 Comments Off on I’ve Been Stripped Naked – Mother Of Twins Killed By Drunken-Cop 68 Views 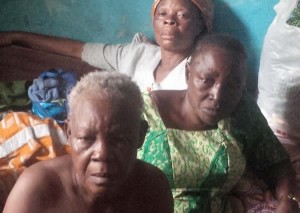 Seventy-five-year-old Beatrice Oyesolu, the mother of twin brothers shot dead on Saturday by a trigger-happy policeman guarding Paulson Hotel on Anibaba Street, Ketu-Ikosi, Lagos, says the promises her children made to her had been shattered.

The septuagenarian said the children ─ Taiye, a naval officer and Kehinde, an engineer ─ had concluded plans to start building her a house next month before the tragedy struck.
The twin brothers, aged 34, who hailed from Oro, Kwara State, were bachelors.

The drunken policeman, Stephen James, with Force number 217884, had opened fire on the brothers and their friend, Jeje, who was celebrating his birthday on the fateful day. The trio had cautioned him to stop harassing customers, who reportedly declined to buy him bottles of beer.
James, said to be a drug addict and notorious for shooting sporadically, killed the twins and their friend before he shot himself dead.

It took entreaties from residents around the hotel to stop the angry mob who wanted to set the facility on fire.

Sympathisers thronged a house in the community, where the twins’ mother, who lived in Mile 12, was brought to. The sympathisers rallied round her as she cried uncontrollably.

She said, “I just came back from church yesterday when they broke the news of their death to me. The government should help me because Taiye and Kehinde were the only hope I have. I have been stripped naked because they are my clothes. Who will I turn to now?

“They promised me a lot of things next year. They wanted to start building a house on my parcel of land next month. This is the seventh month after the death of their father.”

A relative, who did not want his name in print, demanded that the police should be made to compensate the mother of the deceased.

He said, “Why was he given a gun when they knew he was a drunk? The police must be sued. They should also pay compensation to the mother.”

The aunt of the deceased, Mrs. Afusat Salaudeen, said the death was a big loss to the entire family.
She said, “They were very caring. They were the ones sponsoring their elder brother’s son who is in a polytechnic. That brother had been missing for 10 years now. They were easy-going persons.”
Beatrice’s sister, identified only as Iya Ijesha, said, “They were God-fearing children. They never let their mother lack anything.”

A resident around the hotel, Segun Elphus, said the policeman nearly killed his friends and three of his younger brothers last month. He said he advised the supervising manager of the hotel to send James away.

He said, “The policeman was posted here about three months ago. He threatened to kill my friends, who visited me from England last month. My three younger brothers intervened. He nearly shot them.

“Yesterday, he was drunk. Jeje was outside the hotel smoking and he told him to leave. They were still on it when he shot him. Taiye tried to approach him; he shot him. He shot Kehinde while he was fleeing.

Another resident, Dele, said the fatalities would have been more if he was allowed to enter the hotel.

He said, “After he had killed the three guys, he wanted to enter the hotel premises, but the gate had been locked from inside. He was frustrated and shot himself. Sometime when he was drunk, he would say ‘I go kill 30 people, I go kill myself…no case.’”

A neighbour of the deceased on Dairo Street, Johnson Adebola, said they lived in the same flat and were friendly.

“Jeje sold foodstuffs in Mile 12. His parents live in Ijebu, Ogun State. They were four that went to the hotel yesterday. The fourth person, Shola, was lucky to escape. They were actually waiting for Shola’s girlfriend who just arrived in Lagos when the incident happened,” he added.
The hotel was under lock and key as of 3pm on Sunday when one of our correspondents left the area.

The Lagos State Commissioner of Police, Mr. Fatai Owoseni, during a visit to the scene of the crime on Sunday condemned the act of the late officer, saying it betrayed the ethics preached by the Inspector General of Police, Solomon Arase.

Owoseni, who also visited the family of the victims, said investigation was ongoing to ascertain whether the late policeman who committed the dastardly act was on authorised duty at the hotel or not.

He said, “The incident is a devastating one and it is normal for me to visit the scene of the crime. It is also important to see the family of the victims. The IG is aware and saddened by the development. The action of the killer-cop negates what the IG preaches about. The IG has said policemen should not be posted to unauthorised places. The action of the cop negates all of that.

“As a measure to prevent occurrences like this, we have always put up monitoring in place to check the activities of policemen anywhere they may be serving to ensure that they conform to rules and regulation. We are doing everything to ensure that this type of sad incident does not happen again,” he said.

Share
Previous Lagos Policeman Kills Twin Brothers, Their Friend And Then Takes His Life
Next Buhari: How We Intend to Fund N6 Trillion Budget