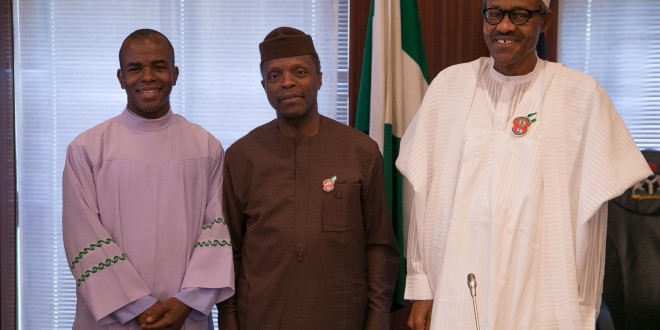 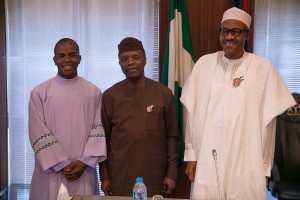 President Muhammadu Buhari has said that one of the best exhortations to the nation he has heard from the pulpit was the one made early this year by Father Ejike Mbaka of the Adoration Ministries, Enugu.
Receiving Father Mbaka who was on a courtesy call at State House, Abuja on Friday, President Buhari expressed his appreciation of the Catholic priest’s exemplary courage.
“Thank you very much for what you have done and said. It brought you out to the whole country as a man of courage. It was honest and well delivered. It has gone into the records as one of the best concerns expressed from the pulpit, not because it favoured me and my party, the All Progressives Congress, but because it was good for the country, ” the President told Father Mbaka.
President Buhari reaffirmed his conviction that change will come to the country, “with a lot of hard work, despite the security and economic problems.” He appealed for the continued understanding and patience of Nigerians.
Vice President Yemi Osinbajo, who was present at the President’s audience with Father Mbaka described the priest as a man “who stood for truth and propriety, and declared corruption unacceptable.”
He added that the Buhari administration “is committed to truth and justice, and won’t encourage corruption in any way.”
Fr. Mbaka, who in the run up to the 2015 presidential election, told his teeming followers that erstwhile President Goodluck Jonathan would not be re-elected because of pervading corruption and insecurity in the land, said he was happy with the mission and methodology of the Buhari administration.
He also wished the President a happy 73rd birthday.