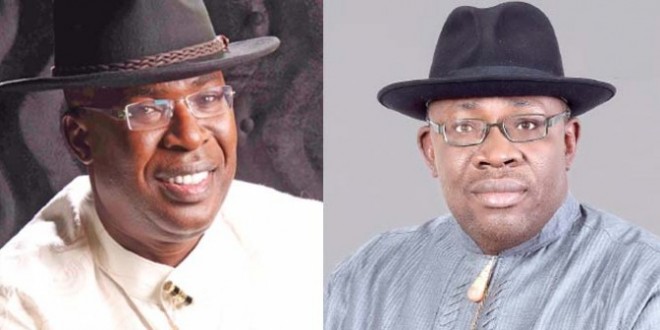 Six political parties that participated in the inconclusive governorship election in Bayelsa State yesterday sent a protest letter to the Independent National Electoral Commission (INEC) demanding for the cancellation of election in Five Local government councils due to alleged violence and election malpractices.

The Political Parties demanded that though the Returning Officer for the disputed elections was hoodwinked into collating and declaring the results in Seven Local Government areas,the elections in Sagbama, Nembe, Ekeremor, parts of Ogbia and Yenagoa local government areas of the state should be reviewed and cancelled as they failed to meet required standard in election conduct.

The parties, under the aegis of Coalition of Progressive Parties, said beside the contentious Southern Ijaw poll, there was widespread violence and malpractices in the aforementioned LGAs.
The parties,which include the Unity Party of Nigeria(UPN), African Congress of Democrats (ACD), Alliance for Democracy(AD), Labour Party (LP),United Democratic Party (UDP) and Hope Democratic Party (HDP), said their call became imperative in the interest of fair play, justice and peace.
The spokesman for the group and Chairman of UPN, Mr. Silas Ikimi, said if the poll from Southern Ijaw be cancelled, it was only proper that Sagbama, Nembe and Ekeremor polls should not be left out.

Ikimi said, “Let us not forget the age long saying that ‘what is sauce for the goose is sauce for the gander’. If the votes from violence-prone Southern Ijaw are to be cancelled, it is only fitting and proper that the results from Nembe, Sagbama, Ekeremor and parts of Yenagoa and Ogbia LGAs should not have been left out.

“There were worse cases of election violence in those areas than were least experienced in Southern Ijaw. As the candidate for the All Progressives Congress, Chief Timipre Sylva, pointed out, the Independent National Electoral Commission should be an unbiased umpire for all the parties.
“Sylva, according to reports, made several protests to the INEC and the commission with regard to the various anomalies perpetrated by the opposition, his protests were ignored and treated with levity and contempt. ”
He said the six political parties had observed with dismay that certain frontline candidate had been making unguarded statements to unnecessarily heat up the polity capable of imploding the state because of his selfish ends.
He said they held in very strong terms that as politicians, they ought to be in the frontiers of uniting the people for the cherished collective goals rather than dividing them.

Ikimi said, “We, as leaders and members of various political parties are of the view that the unfortunate utterances by a leading governorship frontliners may ignite violence and put our people on a warpath if not timely curtailed.
“The truth of the matter is, assuming but not conceding that, those aforesaid acclaimed election offences that culminated in the cancellation of polls in SILGA were committed by members of the APC, we equally assert that the self same violence and sundry offences were also reported in Ekeremor, Sagbama, Nembe and parts of Yenagoa and Ogbia.
“Some examples may suffice: First, we are all witnesses to the fact that the country home of Minister of State for Agriculture, Senator Heineken Lokpobiri, was riddled with bullets and foot soldiers of the opposition ran away with ballot boxes for their party to get victory.
“Second, similar skirmishes of hijacking of ballot boxes and undue intimidation of voters were also reported in Sagbama where some APC leaders such as Stephen Ogula and Christopher Abaraowei and others were beaten to a pulp.
” In Nembe, there was report that shooting started from 6 am and lasted till 11 am on election, among others‎.”