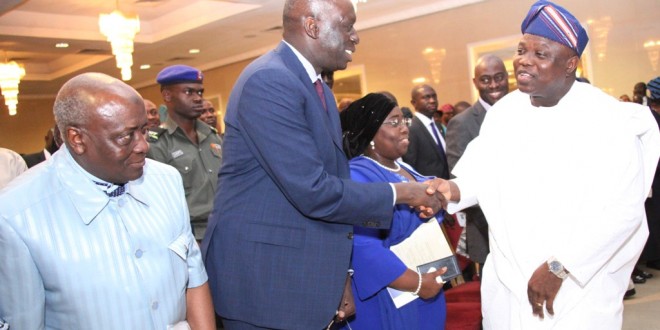 We Use Your Tax Money To Ensure Safety In Lagos- Ambode

December 15, 2015 Comments Off on We Use Your Tax Money To Ensure Safety In Lagos- Ambode 32 Views 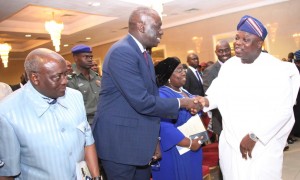 Lagos State Governor, Mr. Akinwunmi Ambode on Tuesday said he would use the tax collected for the well being of all Lagosians and restated his commitment to ensure the security and safety of lives and property as well as sustain a friendly investment climate.

Speaking at the 9th Town Hall Meeting on Security put together by the Lagos State Security Trust Fund (LSSTF) with the theme: “Refreshing Our Security Model,” said his commitment to the safety of the people is unwavering and non-negotiable.

Ambode said the recently used N4.8 billion to equip the police came from tax payers, he said such funds generated from the public will be accounted for and utilized to safeguard the lives of those who have chosen Lagos as home.
“What we have done in the last two weeks that totaled N4.8billion, actually there is no kobo out of it that came from the Security Trust Fund, it actually came from all of you here, because there is nothing called government money, it is actually tax payers’ money. Those of us who have been contributing our taxes and paying our fees, we have apportioned part of the money that you paid as IGR of Lagos State to purchase those equipment donated to the police”.

“So we say to you, it is not our money, it is your money and it is only being used judiciously to protect ourselves”, he said.
On his part, Lagos State Commissioner of Police, Mr. Fatai Owoseni thanked Governor Ambode for the equipment donated to the police, adding that the command had been challenged and motivated by the gesture to do more.

Owoseni, who assured Lagos residents of the determination of the police to adequately and swiftly prevent and respond to crime, said 4,789 motorcycles were equally impounded within the period under review.
Also speaking at the town hall meeting, Chairman of the LSSTF board, Mr. Oye Hassan-Odukale, who noted that the contributions from donors have sustained the Fund in the last nine years, lamented that the years of under resourcing the Nigerian Police and other security agencies by successive administrations at the centre have left a huge deficit that would require a yearly injection of at least N1 trillion for the next thirty years by the Federal Government.

Share
Previous Most ladies were disappointed when I decided to get married – Naeto C
Next IYC condemns manhandling of Akpobulokemi by security operatives, criticizes Buhari