The Sylva-Igiri Campaign Organisation of the All Progressives Congress(APC) in Bayelsa State has raised a fresh alarm over the level of complicity of the Independent National Electoral Commissioner (INEC) Resident Electoral Commissioner in the state, Mr. Baritor Kpagih. in the last Saturday’s governorship election.

The party had earlier raised the concerns that some top officers of the commission in Yenagoa office were working for the People’s Democratic Party (PDP) to undermine the election.
A statement by Sylva-Igiri Campaign Organisation, Director, Media and Publicity Chief Nathan Egba said: “ We had thought that Mr. Kpagih, would remain neutral and not allow his relationship with the former President, Dr. Goodluck Jonathan and the former first Lady, Dame Patience, affect the conduct of the election
“But his actions clearly showed that he was doing the bidding of the former President who appointed him into INEC as a Resident Electoral Commissioner in 2012.
“We are now compelled to let the whole world know that Mr.Kpagih and Dr. Jonathan, were colleagues in the Nigeria Customs Service.
“Mr. Kpagih, rose to the position of an Assistant Comptroller-General of the customs service before his compulsory retirement in 2008, after which he was appointed into INEC by Dr. Jonathan.
“The body language of Mr. Kpagih, who is from Rivers State(state of birth of former First lady, Dame Patience) was a clear indication that he was acting out a script handed over to him to deliver the PDP like he has done previously.
“For Mr. Kpagih to have allowed the charade called election in the seven Local Government Areas already declared, sends strong signals that the INEC was willing to just announce the PDP the winner.
“The preliminary report of the number one election monitoring group in Nigeria, Transition Monitoring Group, TMG, has painted the true picture of the December 5 election, which was charasterised by violence, intimidation and manipulation.
“And as a campaign organization, we are worried that the umpire, INEC, will accept results in such local government areas as Sagbama, Ekeremor, Nembe, Ogbia and parts of Yenagoa despite our protest highlighting that the electoral process had been compromised.
“Our resolve therefore, is that Mr. Baritor Kpagih, should be honest to disqualify himself from the conduct of this election or he be redeployed immediately because of his personal relationship with the former President, who is an interested party in the election.” 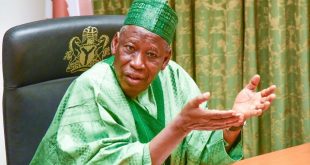 No fewer than 9,926 children have been targeted for vaccination against yellow fever in Gwarzo …