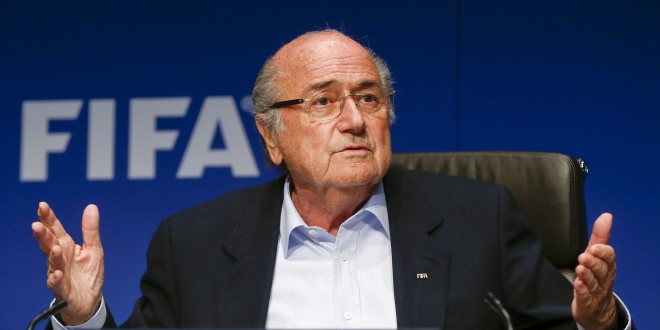 If You Don’t Like My Job, Confront FIFA Congress –Blatter Tells Ethics Committee

November 26, 2015 Comments Off on If You Don’t Like My Job, Confront FIFA Congress –Blatter Tells Ethics Committee 8 Views

Embattled former FIFA President, Sepp Blatter has condemned moves by the Ethics committee of the Federation of International Football Association, FIFA, ordering his suspension from office as President of the association.
Blatter, who spoke in a reaction on Thursday in Zurich during a media interview, said it was only the congress of soccer’s governing body, and not its ethics committee, that could bar him from office.

Blatter criticised the ethics committee, which he had previously trumpeted as a key weapon in the battle against corruption after it was reformed and strengthened three years ago.

According to him, the definition in the FIFA statutes indicated that he was not a FIFA official.
“It is humiliating for the FIFA president that the ethics committee comes and says, you are suspended and you are not allowed to go to the office anymore.

“That’s like a police order and that hurts but it doesn’t kill me, I will fight for me and for FIFA,’’ he said.
Blatter also faces a criminal investigation in Switzerland over a two million dollars payment from FIFA to Platini.
The Swiss attorney-general’s office has said payment was made in 2011 for work Platini had completed nine years earlier, adding that Platini was considered “between a witness and an accused person”.

Reiterating comments he had made previously on the matter, Blatter said contracts could be done in writing or orally.

He said, “I had an oral contract with Michel Platini. “In 1998, when he was done with the World Cup, I needed him to work for me, at the time, he wanted one million and I said there’s no money to pay one million. “He said you can pay me later.”