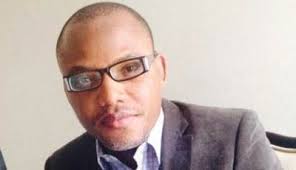 Sitting in Abuja, the prosecution counsel, Moses Idakwo, told the court that afte the arraignment of the accused, the complainant stumbled on some facts which took the matter out of the jurisdiction of the court.
“The complainant is, therefore, applying to discontinue the matter under section 108(1) of administration of criminal justice act 2015.’’

He said, the complainant found out that the accused was involved in terrorism and has been financing it adding; “The complainant is, therefore, applying to discontinue the matter under section 108(1) of administration of criminal justice act 2015.’’

Moses Idakwo also said the DSS had also obtained an order from the Federal High Court, Abuja, and dated Nov.10, to detain the accused in its custody for 90 days.

But Kanu’s counsel, Vincent Obetta objected and prayed the court not to discontinue the case because the prosecution did not present any information from the Attorney-General of the Federation. He told the court that the DSS violated the order of the court which granted bail that was perfected but not granted, adding that the accused had been in DSS custody had been in DSS custody since he was arrested since he was arrested.

After listening to both counsels, the magistrate, Mr. Usman Shuaibu adjourned the case until December 1 for ruling.