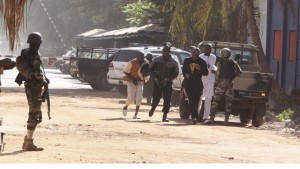 At least three people have been killed in Mali after a group of attackers armed with guns and grenades stormed a luxury hotel in the capital, Bamako, taking up to 170 people hostage.

At least three people have been killed as gunmen take hostages at the Radisson hotel in Mali’s capital Bamako
Malian special forces were later seen launching an assault on the Radisson hotel, with local and state television saying dozens of hostages had been freed. However, the hotel’s owners said according to its latest information 125 guests and 13 staff were still inside.

Al-Mourabitoun, an African jihadi group affiliated with al-Qaida, claimed responsibility in a message posted on Twitter. The claim could not immediately be verified.

A security source told Reuters that special forces personnel were clearing the hotel floor by floor, and TV pictures showed heavily armed troops inside the lobby. “The attackers are still inside. We’re hearing gunfire from time to time,” a witness outside the hotel told the agency.

The Malian troops were being helped by special forces from the US and France. The US Africa Command said forces stationed in Mali were helping to secure the scene, while France’s national gendarme service said “about 40” French special police forces, based in Bamako, were taking part in the assault on the hotel.

The head of Mali’s military, Modibo Nama Traore, said about 10 gunmen stormed the hotel shouting “Allahu Akbar” and firing on the guards. A hotel staff member said grenades were used.

Among the freed hostages was a famous Guinean singer, who told reporters he heard some of the attackers in the room next to him speaking to each other in English.

“I heard them say in English ‘Did you load it?’, ‘Let’s go’,” said Sekouba “Bambino” Diabaté. “I wasn’t able to see them because in these kinds of situations it’s hard.”
Some hostages, including those able to recite verses of the Qur’an, were released, security sources told Reuters.

A US military official said at least six Americans have been evacuated from the hotel, which is popular with foreigners. Air France said 12 of its crew who were staying in the hotel were safe. It has cancelled its scheduled flights to and from Bamako for Friday. Turkish Airlines said six of seven crew members had been rescued.

India’s foreign ministry said 20 Indian nationals were among the hostages, but that they were all known to be alive. Seven Algerians, including diplomats, were trapped in a hotel, according to the country’s foreign ministry.

The Chinese state news agency Xinhua said at least seven Chinese tourists were among those trapped inside the building. It has broadcast a short video clip said to be filmed by one of the hostages.

Mali’s president, Ibrahim Boubacar Keïta, was in Chad for a meeting of regional leaders, but was cutting short his trip, officials said.

The military said at least three people had been killed in the assault. Their identities have not been confirmed, but one is thought to be a French national. Military sources said three attackers had been killed, but this could not be confirmed. Ambulances and a convoy of UN vehicles were at the scene.
Mali has experienced significant activity in recent years from Islamist militant groups, who at one point seized the strategic town of Konna. This was returned to government control with the assistance of France, the the former colonial power, which launched a military offensive in 2013 at Mali’s request.

On Friday, the French president, François Hollande, who is also dealing with the aftermath of the brutal Islamist attacks on Paris a week ago, said everything possible was being done to end the siege. France’s gendarme service said about 50 specially trained police troops were en route from Paris to Bamako.

A security source told AFP the gunmen entered the hotel compound in a car that had diplomatic plates. “It’s all happening on the seventh floor, jihadists are firing in the corridor,” the source said.

The hotel is just west of the city centre in a neighbourhood that is home to government ministries and diplomats.

The US-based Rezidor group, which owns the hotel, initially said 140 guests and 30 staff were taken hostage by two gunmen: “The Rezidor hotel group … is aware of the hostage-taking that is ongoing at the property today, 20 November 2015. As per our information two persons have locked in 140 guests and 30 employees.

The Radisson attack follows a nearly 24-hour siege and hostage-taking at another hotel in August in the central Malian town of Sevare in which five UN workers were killed, along with four soldiers and four attackers.

Five people, including a French citizen and a Belgian, were also killed in an attack at a restaurant in Bamako in March, in the first such incident in the capital. Both attacks were also claimed by al-Mourabitoun.

Northern Mali was occupied by Islamist fighters, some with links to al-Qaida, for most of 2012. Although they were driven out by the French-led military operation, sporadic violence continues.
Source The Guardian