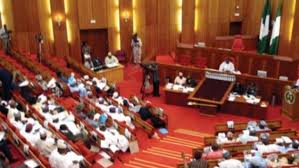 The Senate on Wednesday rejected a motion for the payment of N5, 000 monthly allowance to unemployed youths in the country.
The motion, which was sponsored by Philip Aduda (PDP, FCT) was concluded with chaos among the senators as attempts by the Minority Leader, Godswill Akpabio, to second the motion, was stalled by the disruption and raging in the house.

Senate President, Bukola Saraki, in his intervention, posed the question but the senators responded along party lines.
In response to the question posed by the Senate President, while Peoples Democratic Party (PDP) members supported the motion, senators of the All Progressives Congress (APC), who were in majority, rejected it.

A motion calling for the probe of the utilisation of Subsidy Reinvestment and Empowerment Programme (SURE-P) funds by the immediate past administration was however, adopted by the senators.

Babajide Omoworare, who sponsored the motion, prayed that every naira spent by the past government on SURE-P and other poverty alleviation programmes should be accounted for.

Saraki, in his remarks, urged the senators to take the issue of unemployment very seriously and not play politics with it.
The Senate President said, “We should stay above party line on this issue that is so important. We have seen growth in the last years but this has not translated to employment.

“Government alone cannot do it; the private sector has a role to play and the enabling environment must be created.”
The motion on Wednesday is a move by the PDP leaders calling on President Muhammadu Buhari and the ruling APC to fulfil their campaign promise of paying N5, 000 to unemployed Nigerian youth.