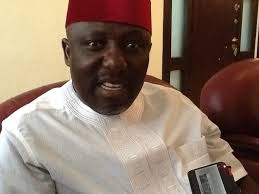 Following a recent media reports credited to Governor Rochas Okorocha, that he could have been the current Senate President if he had heeded to his (Okorocha’s) advice to join the All Progressives Congress, APC, Chief Emeka Ihedioha, former Deputy Speaker of the House of Representatives and candidate of the Peoples Democratic Party (PDP), in the April 11 governorship election in Imo State, has debunked the media reports, describing the Governor’s claim as “a blatant lie, diversionary” adding that it could indeed only have come from a man, very well known for his penchant for falsehood.”

Ihedioha, who spoke through his media aide, Mr. Chibuike Onyeukwu, said, “Although, we find the Governor’s acknowledgement of Rt. Hon. Ihedioha’s capacity to chair the National Assembly as a well known fact, we however wish to state that the statement is in its entirety false, diversionary and indeed could only have come from a man, very well known for his penchant for falsehood,” Onyeukwu said.
Onyeukwu noted that Governor Okorocha did not visit Rt. Hon. Emeka Ihedioha before the elections to plead with him to jettison his gubernatorial ambition.

“The only time Governor Okorocha visited Chief Ihedioha was in 2013, in company of Senator Osita Izunaso, to condole with him on the death of his younger sister and there is no way they could have discussed politics during the condolence visit,” the media aide said.
According to him, the “massive fraud and massive rigging” that skewed the election in favour of the APC, would have been unearthed if the election tribunal had considered the petition filed against the declaration of Okorocha as winner of the governorship election.

Speaking further, Onyewu said, “Rather than fruitlessly engage in diversionary antics, Governor Okorocha should concentrate on how to address the mounting issues of hunger, over nine months of unpaid workers salary and 20 months pension arrears, industrial actions, collapsed economy and comatose state of infrastructure under his watch.”

Governor Okorocha had claimed at a recent press conference that he personally visited Ihedioha and advised him to join the All Progressives Congress, APC, and vie for the Owerri Senatorial seat of the party in the last general election.

“Despite my candid advice to Emeka Ihedioha, he refused to accept the offer. If he accepted the offer, he could have been the Senate President in the present dispensation,” Okorocha claimed.

But the Governor reportedly viewed that Chief Ihedioha’s refusal to join the APC equally rubbed off negatively on the collective interest of Ndigbo.