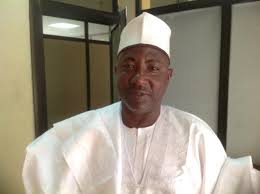 Mohammed Sanusi, General Secretary, Nigeria Football Federation has debunked an allegation that the Nigerian Customs Services seize the federation’s consignment at the Apapa Ports.
Sanusi said in a report on Thursday that the consignment, which arrived at the Lagos port on September 4, was in the process of being cleared by the Customs.

He said the federation is following due process in the clearance of the jerseys and other equipment from its kitting company, Nike.
It was reported that the inability of the NFF to clear a consignment of kits from its sponsors, Nike, at the Apapa Ports had resulted in shortage of kits for the various National teams.
The U-23 team, which participated at the football event of the 11th African Games, used only a set of jersey in Congo to prosecute their matche

According to the General Secretary, the delays in arrival of the consignment was due to change of the mode of transportation of the goods.

“I want to clarify the fact that the consignment has not been seized but are being cleared at the moment. We have been used to receiving the consignments by air but this time it came via shipment.

“The NFF is following due procedures to ensure the kits come out in time for our teams abroad.”
The Golden Eaglets are presently in Argentina camping ahead of the FIFA U-17 World Cup in Chile.
The Chile world cup will run from Oct. 17 to Nov. 8.

The players and officials have made passionate appeals to NFF for provision of more kits.