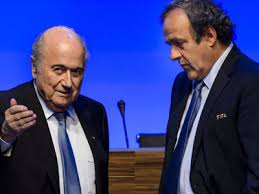 October 8, 2015 Comments Off on FIFA Suspends Blatter and Platini 13 Views

This was made known in a statement released by the adjudicatory chamber of Ethics Committee.

“The adjudicatory chamber of the Ethics Committee chaired by Hans Joachim Eckert has provisionally banned FIFA President Joseph S. Blatter, UEFA President and FIFA Vice-President Michel Platini, and FIFA Secretary General Jérôme Valcke (who has already been put on leave by his employer FIFA) for a duration of 90 days.
The duration of the bans may be extended for an additional period not exceeding 45 days. The former FIFA Vice-President Chung Mong-joon has been banned for six years and fined CHF 100,000. During this time, the above individuals are banned from all football activities on a national and international level. The bans come into force immediately.”