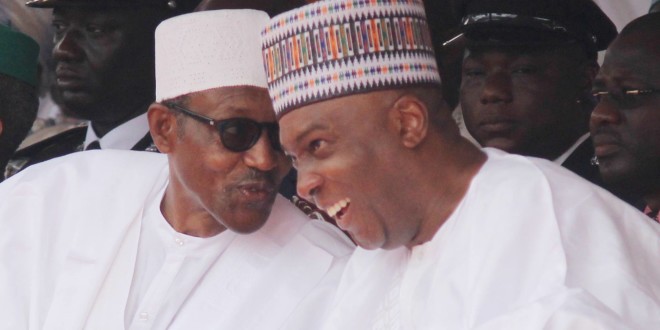 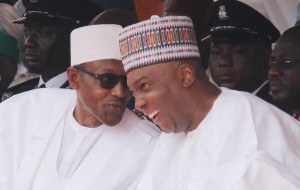 Senate President, Bukola Saraki, was one of the dignitaries who joined President Muhammadu Buhari this morning to mark the nation’s 55th Independence Anniversary inside the Presidential Villa, Abuja.

The event was the ceremonial change of guards held at the forecourt of the seat of power.

That was the first time Saraki will be seen openly inside the Presidential Villa since he emerged the President of the Senate contrary to the choice of the leadership of the ruling All Progressives Congress.

On his arrival at the venue of the event, Saraki took the salute and proceeded to join dignitaries who he exchanged pleasantries with before taking his seat beside a former military Head of State, Gen. Yakubu Gowon (retd.).

He thereafter engaged Gowon in a long discussion.

Vice President Yemi Osinbajo who arrived a few minutes later also shook hands with the dignitaries including Saraki before taking his seat beside the Speaker of the House of Representatives, Yakubu Dogara.

Buhari, on arrival at about 10.05am, also received the national salute.

After granting a presidential permission for the parade to proceed, the President also proceeded to the pavilion where he shook hands with the dignitaries including Saraki and took his seat between Osinbajo and the President of the Senate.

The first four Nigerian citizens were all decked in white Agbada.
Source : The Punch