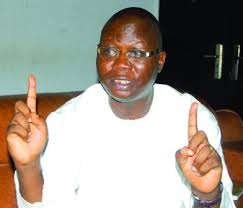 National Coordinator of Oodua People’s Congress (OPC), Otunba Gani Adams, has condemned the gruesome killing of 10 operatives of the Department of State Security by pipeline vandals in Arepo, Ogun State.

In a statement in Lagos, OPC’s Director of Media and Publicity, Mr Yinka Oguntimehin described the action of the vandals as “condemnable.”

“It is an act brazen in its criminality which is injurious to the national psyche only perpetrated by sub–human beings who are not fit to live”, it added.

According to the group, “It is sad that some miscreants who are being financed by a sinisterly powerful and deadly oil mafia have put paid to the lives and brilliant careers of 10 wondrous well trained members of the Department of State Security Services.”

The group stated that the death of the operatives in such a gruesome circumstance is a pointer to the fact that the war against pipeline vandals is “not a tea party’s affair which can be taken or approached with kid’s gloves.”

The statement reads: “The death of the bright 10 SS operators though sad and sorrowful is a testimony to the fact that the war against pipeline vandals and protection of our common wealth should not be localized within the confine of the regular security agents alone.

“This unfortunate event should kindle our sense of perception and reasoning and task patriotic feeling in us to always treat national issues without sentiment.”

It also called on the Federal government to “confront this dare devilry act of pipeline vandalism by involving both the regular armed agencies and the socio-cultural groups which have been tried and successfully monitored the pipelines without major calamity and waste of human resources like this.”