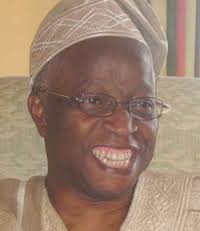 Ladipo Adamolekun is a renowned academic, being a Nigeria National Merit Award winner. A professor of Public Administration who taught at the Obafemi Awolowo University and worked at the World Bank, Adamolekun now prefers to style himself an “independent scholar.” He is more famous recently for Iju Quarterly Public Affairs Forum, which he convened and hosted at his home in sleepy Iju, North of Akure, the Ondo State capital. In this conversation, Adamolekun scores President Muhammadu Buhari on security, economy and what is perhaps the nation’s most daunting challenge, corruption. His scorecard is presented separately while the conversation is about the scorecard itself. Excerpts:

What of the economic implications?
We’ll come to that.

I’m sure if you factor them in, it will affect your grades further. All the public sector funds are now back to the CBN, so the commercial banks will not be able to use them; only their own funds will be available for lending on short and and medium term basis. That has pushed up the market indicators as the interbank rate for short term funds has gone up.

I’ve read about what you’ve said, and I think that the banking industry should be cleaned up if it needs to be cleaned. The treasury single account is about public money and it doesn’t mean that it is single, it can also be a set of bank accounts, it’s just that the CBN would then be able to account, because after all, part of the corruption and looting we talked about is coming from this accounting issues. Internationally, this is good practice. Treasury single account is one of the international best practices in public financial management. I note the consequences that you have summarized, though I know you are not an economist. I know we have a problem even when something is good practice: How is it implemented, how is the Central Bank going to do it that he does it in a way that yields to the result. Because what he’s supposed to do is to lead the banks and not simply send people to be getting some deposits. So it increases the role of the Central Bank and I will tell you that I cannot sit here and tell you that they will handle it effectively. We can only hope that if it is handled effectively, it will contribute to helping the economy in the medium term, actually because this is the immediate term, even the short.