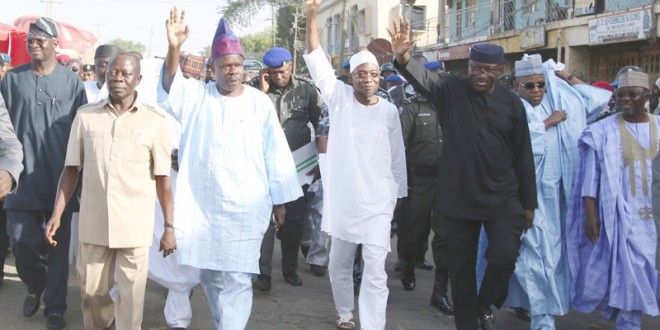 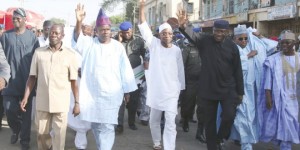 Governors elected on the platform of the All Progressives Congress (APC) under the auspices of Progressive Governors Forum (PGF) have vowed to tackle unemployment head-on in order to ensure lasting peace in their states and the country as a whole.

Chairman of PGF and Imo State Governor Rochas Okorocha made the disclosure after exhaustive deliberations at the Adamawa State Government House, Yola.

He noted that to achieve the objective, a committee to be superintended by the Governor of Kebbi State has been formed to fashion out modalities and operational strategies.

He noted that the provision of employment will solve the raging poverty in the country and lead to a lasting peace too.

Okorocha further noted that tackling poverty was a challenge that the APC was concerned about.

The forum also commended Governor Muhammadu Bindow Jibrilla for his record of achievements within the three months as the chief executive of Adamawa State.

Okorocha stated that the forum had resolved to be meeting in their respective states to enable the governors see for themselves what they are doing in their various states and to fashion out modalities of how to strengthen developmental strides in the states.

According to him, the forum is poised to employ peer review mechanism, where the state governors would compare notes of achievements.

Noting the impact being made by President Muhammadu Buhari in rejuvenating Nigeria’s comatose economy, the forum pledged total support and commitment to the leadership of the President, noting that his leadership has reawakened the confidence of Nigerians in governance, and had stabilized the country within the last 90 days of its existence.

The forum also threw its weight behind the party in the upcoming polls.

“We also stated the APC governors’ forum will work with the party to strengthen it and also make sure it becomes victorious in all elections coming up very soon,” he said.

The governors also observed a minute’s silence in honour of the late deputy governor of Borno State who died recently during an official assignment.

Okorocha disclosed that APC had revived the lost glory of governance caused by the 16 years of PDP misrule in the country.

The governor, who advocated a robust working relationship between the executive and legislative arm of government in the state, noted that the frosty relationship witnessed hitherto had caused the state so much as it saw the change of guards between seven governors in seven years.

In an address at the palace of Lamido of Adamawa during their courtesy call on the royal father, Chairman of Nigerian Governors’ Forum, Zamfara, Abdul’Aziz Yari, re-echoed the commitment of the progressive governors in restoring the lost glory of governance.

In his remarks, Lamido of Adamawa observed the rapid progress witnessed in the power sector since the coming of the APC administration, noting that it is an indication of a purposeful leadership.

He noted that with the tempo, very soon, the economy will receive a boost as the success in the power sector had the tendency of triggering a concomitant massive economic reconstruction in the nation.

The National Chairman of the All Progressives Congress (APC), Chief John Odigie-Oyegun, has reiterated the resolve of President Muhammadu Buhari-led administration to make probity, accountability and sincerity of purpose its cardinal objectives in line with the party’s manifesto and change agenda.

In the same vein, a chieftain of the party, Chief Ogbonnaya Onu has said that the Federal Government under Buhari and the governing party is currently taking the country in a new direction in order to regain its place in the comity of nations.

Oyegun, who stated this Thursday at a workshop organised by the party for its state chapters’ auditors at the party’s national secretariat in Abuja, noted that the ongoing activities of the governing political party were of keen interest to the public and the international community.

He said: “I want to remind you that the great victory even comes with a greater sense of commitment and responsibility now that we are in government, and in line with the party’s manifesto and change mantra, we have only started a journey of probity, transparency and sincerity of purpose.

“Our conduct at all times must be worthy of emulation and even our personal lives and, most particularly, the way we run the affairs of the party.

“I call it a journey because all of us must be involved and no one can be left behind in this new order of management of the affairs of our great but long-suffering country. We must bear in mind that we are the change agents worthy of emulation.”

Earlier in his address at the workshop with the theme: “Financial Management in a Political Party: Internal Audit Perspective,” the APC National Auditor George Moghalu, informed participants that the workshop became necessary in order to address the challenges of poor communication in the party’s auditing section, hence the need to bring professional auditors to train the party’s auditors.

“It is also our target that this workshop will go a long way to bridge some of these observed expectation gaps between the national auditor’s office and the office of the state auditors,” Moghalu said.

Meanwhile, Onu spoke when a delegation from the National Democratic Institute (NDI) led by Nana Ato Dadzie visited him in Abuja, stressing that the new path was crucial to the re-discovery of the country’s lost glory.

“It is very clear now that the President is taking Nigerians in a new direction, and this new direction is very important because we are trying to rediscover many of the values that made Nigeria a very great nation, values that were somehow overlooked.

“These are values that a society needs to become a great nation: Values like honesty and patriotism because Nigeria was born a great nation and Nigeria did great things in the past and there are so much expectations, not just in Africa but all over the world.

“We believe that the new direction we are on now will make Nigeria play a vital role in the affairs of the world in the search for peace and prosperity,” Onu said.

On the request to establish a replica institute like NDI in Nigeria by the APC, he said: “I believe in future, we will be able to do what the NDI is doing today. I am sure that the APC will get an institute that will do the same because we have seen that nations that embrace democracy hardly go to war. It is very important because Nigeria is the home of the largest concentration of black people all over the world and the largest economy in Africa.”

Earlier, leader of the NDI delegation, Nana Dadzie, had told their host that transition of power is as important as the electoral process itself, saying that “without a sound transition arrangement, a very sound election can be botched. In many countries, transition continues over and over again because not very sound foundations are laid.”