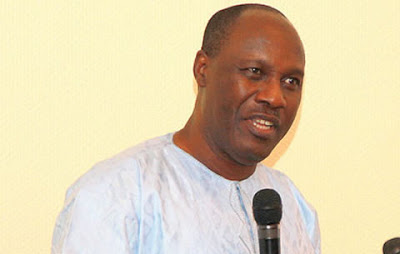 Attacks Against Jonathan: Oshiomhole Is A Villa Sycophant – Orubebe

August 26, 2015 Comments Off on Attacks Against Jonathan: Oshiomhole Is A Villa Sycophant – Orubebe 27 Views

Elder Godsday Peter Orubebe, ex-minister of Niger Delta Affairs,Tuesday, took a swipe at Edo State Governor, Comrade Adams Oshiomhole over his recent criticisms of former president Goodluck Jonathan’s administration, calling him a Villa sycophant who willingly switches allegiance to whoever is in power.

Orubebe lambasted Comrade Oshiomhole while speaking with selected journalists in Abuja and further berated the governor for speaking against Jonathan who he once said was a great leader.

He said, “Oshiomhole is an ingrate and a popular Villa sycophant who is quick to switch allegiance to whomever is in power.”

Descending heavily on Oshiomhole for “disrespecting the former president,” Orubebe advised incumbent President Muhammadu Buhari to watch out for the likes of the Edo State governor, who will choke Buhari with acclamations in a bid to have inroads and access to dip their hands into the nation’s cake.

Orubebe, who also accused Oshiomhole of being a problem and major sycophant under the immediate-past administration as the Chief Adviser on Economic and Labour matters and particularly on subsidy removal to Jonathan, regretted that ‘Human memory is short.

He emphasised that ‘it’s unfortunate that Oshiomhole who should talk like a governor is today, biting the fingers (Jonathan) that fed him and seems to have forgotten in a hurry that he once cried around the former president for assistance and recognition.