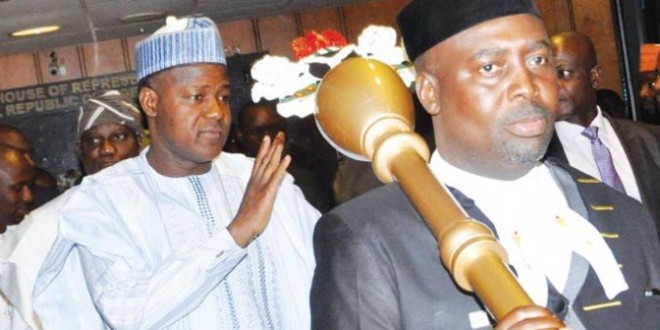 The House of Representatives has declared its readiness to take salary cut and back President Muhammadu Buhari’s anti-graft measures.
Hon. Mohammed Sani Zorro, Chairman, Ad-hoc Committee on Media and Public Affairs, told newsmen in Lagos that all members of the House of Representatives irrespective of party affiliation are on the same page with the President on the change agenda and ready to give him the necessary legislative backing to actualise the agenda.

Zorro, who represents Gumel/Gagarawa/Mai Gatari/Sule Tankarkar Federal Constituency of Jigawa State on the platform of the All Progressives Congress (APC), said the need to streamline the funding of the House’s activities in line with best practices across the world and the decline in Nigeria’s economic fortunes were the reasons Reps set up the Clement Nwankwo Committee.

Promising Nigerians a new wave of transparency in the conduct of affairs in the House, Zorro, a former national chairman of the Nigeria Union of Journalists (NUJ), said the lawmakers will abide by whatever recommendations the Nwankwo committee makes as regards oversight function allowance, sitting allowance, constituency allowance and all aspects of funding of the House of Representatives.

We’ll lead by example
On whether the lawmakers can take salary cut, Zorro, who commended President Buhari, Vice President Yemi Osinbajo and some governors who have elected to have their salaries cut by 50 percent, said they are willing to toe the same path because “we are conscious of our integrity. We want to live by example.”

He said that the decision of the House to review the funding of its activities was in submission to the wishes of Nigerians.

He said: “I am here to reveal to you that as a result of the consistent outcry by Nigerians who have been taking critical exception to the funding of the National Assembly, the House has decided to review the holistic funding of its activities.

“This review will also result in right-sizing the funding of the various aspects of our activities. We have already put a mechanism in motion to achieve that. It may also result in the drastic cut of our finances, be they salaries, allowances and running cost. We are conscious of our integrity; we will lead by example.

“What I can assure you is that we are submitting to the will of the people as a responsive and responsible legislative institution. We can no longer ignore the popular wishes of the Nigerian people who elected us in the first place. Even if the measures that we will consider will inconvenience us, we will rather make that sacrifice and respect the views of the Nigerian people once and for all.”

Declare support for anti-graft war
On the anti-graft war, he said: “We are ready to support unconditionally the war being waged against corruption as spearheaded by the executive arm of government under President Muhammadu Buhari.

“I can tell you this on behalf of the House. Whoever is averse to the war against corruption in Nigeria is not a patriot. All patriotic people, whether in the National Assembly or outside of it, must support this war because of the implication of the degenerative level of our own corruption, which has compromised everything that Nigeria used to be. We are ready to assist in the building of a strong and strategic Nigeria. This cannot come about with all these reports in the newspapers of pervasive corruption. So, unconditionally, the House will support the war against corruption.”

On call that the scope of the anti-corruption probe should be widened and extended to 1999, Zorro said it is the prerogative of the executive arm of government, which has control over the security and intelligence agencies, to decide “but what the parliament does is to check the excesses, if any, of whatever process that the executive implements.

“Once the National Assembly discovers that this anti-corruption pursuit is tilted unfairly, maybe against a person or group of persons, they will query it. But as of now, we are not entertaining any fear. We will support it, even if that corruption probe will involve the National Assembly. We just have to clean up this country because corruption actually reduces our humanity to the barest level.”

…Set for showdown over standing committees

Members of the House of Representatives are poised for a showdown with the leadership of the Green Chamber over who gets what in the composition of the House Standing Committees.

Hon. Yakubu Dogara, Speaker of the House was said to be in a fix about how to please various interests cutting across party lines in the Lower House regarding the membership and chairmanship of the yet-to-be-named committees.

Standing Committees of either the Senate or House of Representatives in the National Assembly have oversight functions to monitor government or private agencies, programmes and activities within their jurisdictions, and in some cases, in areas that cut across committee jurisdictions.

The intrigues surrounding the composition of the Standing Committees started with the secret inauguration of a Selection Committee saddled with that responsibility under the chairmanship of Speaker Dogara on Tuesday, August 11, 2015.

Journalists earlier invited to the event by the Speaker’s media team were asked to leave on second thought immediately after Dogara arrived for the inauguration function.

Subsequently, on Thursday, August 13, the day the lawmakers were proceeding on an annual vacation, the chairman of the House ad-hoc committee on Media and Public Affairs, Hon. Mohammed Sani Zoro (APC, Jigawa) told journalists that the Selection Committee will be meeting during the recess in order to perform its function of placing members in relevant committees.

“This will be achieved also in the weeks to come while in processing. In other words, the Selection Committee of the House as well as other committees that have tasks and assignment to accomplish will be very much around,” Zoro had said.

However, the committee met only once since its inauguration even as reports filtered out that Dogara planned to relocate overseas with some loyalists to avoid intense lobbying from members.

The reported foreign trip may be a special arrangement other than that of the Selection Committee as some statutory members of the committee were not part of the trip, a development pointing to a sharp division in the body of principal officers of the House.

Enquiries at the weekend showed that the Deputy Speaker, Hon. Yusuf Suleiman Lasun; House majority leader, Hon. Femi Gbajabiamila and few other nominees representing state caucuses in the Selection Committee were in Nigeria holidaying since they were not included in the arrangement for the trip.

Attempt to get clarification from the House spokesman, Zoro, proved abortive as calls placed to his phone were not going through. It was however gathered that he travelled to his constituency to sympathise with victims of a flood disaster as well as to mobilise support for them from relevant government agencies.

But a highly-placed source privy to the developments said it might be difficult to have the Standing Committees ready by September 29 when the House will reconvene, given the ongoing intrigues trailing what number of committees is necessary on one hand and the choice of committee on which to serve by members on the other.

“The Standing Committees can only be constituted by the Selection Committee as demanded by the House Standing Rules. But since the committee so empowered has not been meeting, how do you expect the aim to be achieved?” the source said.

Already, there are fears by the majority All Progressives Congress (APC) members that Dogara might be dancing to the tune of the opposition Peoples Democratic Party (PDP) lawmakers regarding the chairmanship and membership of some choice or juicy committees as payback for the latter’s support to his speakership aspiration.

Each member was expected to be given a form to fill by the Selection Committee on which he or she will indicate the committees to serve in order of preference as the committees to be constituted have been graded into three categories.

However, a ranking member of the House on the platform of the APC who pleaded for anonymity said that they will reject any attempt by their PDP counterparts to hijack the House under whatever guise.

“I don’t know whether Dogara wanted to please anybody and spite another. But what I can tell you is that we have tolerated PDP members’ divisive antics enough, because we won’t take it anymore, committees or no committees,” he said.

But a member of the Selection Committee, Hon. Ayo Omidiran (APC, Osun), denied any underhand dealing regarding their assignment, saying the composition of the Standing Committees will be done with soonest.

“There is nothing hanky panky about it. It is a very straightforward thing. By the time we resume, we will meet again and the committees will be sorted out,” Omidiran said.

Recall that Dogara had earlier promised in his Legislative Agenda presented to members to cut down the number of Standing Committees from 89 in the 7th Assembly to a desirable size in order to avoid overlapping functions by some of the committees, which he said was a waste of time and resources.

However, time will tell whether the Speaker will keep to his words or not, given the current economic realities on ground as a Standing Committee of the House requires quarterly allocations to perform its oversight functions depending on the level of activities of the committee.