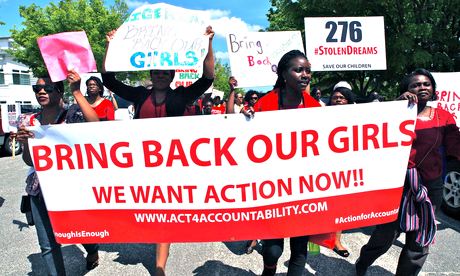 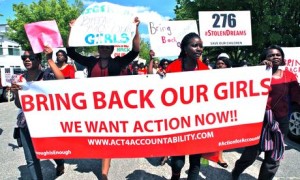 The #BringBackOurGirls (BBOG) group has stated that the world should ensure that the 219 Chibok girls abducted by the Boko Haram sect in their school in Borno State last year were not abandoned or forgotten.

Consequently, BBOG said it would organise a Global Week of Action in order to commemorate the 500 days of captivity that the 219 Chibok schoolgirls spent after they were abducted by the Boko Haram sect.

The week is aimed at reminding the world that the 219 Chibok girls who were abducted by the insurgents on April 14, 2014 are still in captivity and no news yet of their whereabouts.

Dr Oby Ezekwesili and Hadiza Bala Usman, leaders of BBOG, said in a statement that the girls have become a symbol of oppressed, repressed, disadvantaged, hurting and unsafe persons everywhere in the world adding that forgetting them will be like forgetting all the vulnerable in the society.

“Our Chibok girls are the symbol for all the oppressed, repressed, disadvantaged, hurting, unsafe persons everywhere, especially women and children. The advocacy for their safety and safe return is a symbol of the defence of the dignity and sanctity of human life,” the statement said.

The group urged the world to add their voice in the advocacy for the abducted girls that have been in the hands of their captors for over 450 days to be rescued.

“Wherever you may be around the world, we urge you to join us in voicing out that our innocent Chibok girls (who are global citizens) are crying to be rescued, that the world must ensure that they are never to be forgotten,” it said.

Furthermore, it said the world cannot afford to move on without a positive closure on the monumental tragedy that befell the schoolgirls who had been abducted in their school in their search for education.