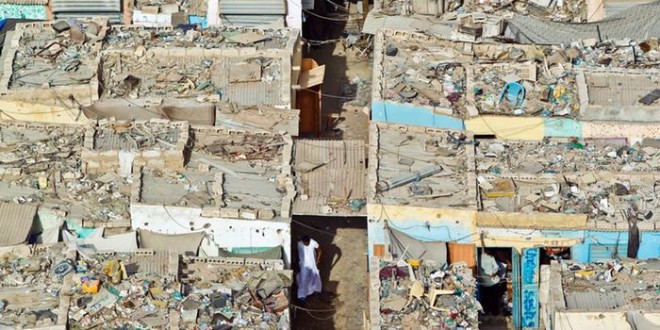 Sent Into Freedom: Mauritanian Flees From Slavery In Africa For Life In Germany

August 15, 2015 Comments Off on Sent Into Freedom: Mauritanian Flees From Slavery In Africa For Life In Germany 29 Views

Ahmet Falla, a soft-spoken 20-year-old from Mauritania does not want to spend his life in slavery like his mother did. He wants to live in freedom. He hopes to find it in a small town in northeast Germany.

Slavery is a matter of hereditary caste in traditional Saharan and Sahelian cultures. Because his mother was an unpaid domestic labourer, Ahmet Falla was pre-ordained for the same fate. There’s a family in Mauritania that considers him their property.

“If I’d stayed in Mauritania, I’d have had to work without pay for my whole life,” Falla said in French. “I have no rights down there.”

That’s why Falla is in Germany, living with two other Africans as an asylum applicant in a government-provided apartment in Tutow, a small town an hour’s drive from the northeastern coast.

The Islamic Republic of Mauritania is on Africa’s West coast, South of Morocco’s Western Sahara province and North of Senegal. The country is three times the size of Germany in terms of land area, but has only 3.5 million people. It’s mostly desert.

“If I returned to Mauritania, the family that thinks of me as their property might kill me as a punishment for my having fled,” Falla said. “I’d rather kill myself than go back.”

Falla’s prospects for being granted asylum in Germany are slim. Slavery was officially abolished in Mauritania in 1981, and holding slaves was criminalized in 2007. Officially, slavery no longer exists.

The German government classifies some countries – Syria and Eritrea, for example – as particularly dangerous or repressive places to which asylum applicants cannot be sent back home. It doesn’t classify Mauritania that way.

De facto slavery remains widespread in Mauritania, according to a European human rights official who works for a major international organization in the capital, Nouakchott. He asked not to be named in order to avoid burdening his relationship with the country’s government, which denies that slavery remains a serious problem.

The official said Mauritanian society was traditionally organized into clans – large extended families – with the clans divided into various castes. Occupations were hereditary: Islamic scholars, musicians, artisans and workers of various kinds, domestic and agricultural slaves – everyone inherited their roles and their social status.

In theory, the system no longer exists, but in practice it’s still very much alive and quite difficult to escape, the human rights official said. The problem has three elements. First, though there are laws against slavery, they’re scarcely enforced. Second, many Mauritanians are illiterate or live in remote rural settings, and have no knowledge of their legal rights.

Third, and perhaps most difficult to overcome: People who leave their clans to escape their hereditary status have few real options. They often move to one of Mauritania’s towns, where they’re shunned. No one gives them work or lends them money to start a business. They live in poverty on the margins of society.

No going back home

In that light, it isn’t hard to understand why Ahmet Falla doesn’t want to go back to Mauritania. It’s something of a miracle that he managed to leave the country in the first place.

Falla’s mother tongue is Wolof. Most Wolofs live in Senegal, but some live across the Senegal River in Mauritania.

“My mother died when I was little,” Falla said. “A sister of my mother who lived in Senegal took me in.”

Falla grew up with his aunt. But, when he turned 17 a couple of years ago, the upper-caste family for which his mother had toiled as a slave told the aunt that she should bring Falla back to Mauritania. It was time for him to start working, they said.
Unpaid, Falla said, and forever. Without rights, without freedom, treated condescendingly by the masters.

Falla’s aunt had no children of her own. He was in effect her only son – and she wanted to protect him from spending his life in slavery. She asked a Senegalese friend with Swedish papers to pretend that he was her son, and take him to Sweden.

The gambit worked – Falla was able to get into the country. But the fake papers didn’t hold up to scrutiny, and he ended up fleeing to Germany – to avoid being put in jail and deported, he claimed, although Sweden is generally very generous with asylum applicants.
Falla told DW that he believed his Senegalese aunt might now be dead. He’s had no contact with her for over a year, and fears that the clan’s leaders might have had her killed as punishment for her disobedience.
“She took a big risk by helping me to flee,” Falla said. “They would have punished her.”

Integration into a new country

Falla seemed genuine – a gentle young man, not hard or wily. Yet it’s impossible for a reporter to know how much of his story is factually accurate, or whether it might have been embellished in some details to increase his chances of being granted permanent refugee status.

In any case, Falla insisted that he would never go back to Mauritania, even if his application was rejected. If necessary, he’ll go to ground in Europe, and live a life without a residency permit, without the right to find a job, without insurance, on the margins.