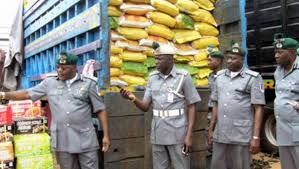 August 9, 2015 Comments Off on ‘Rice Import Not Banned, But…’ Customs Declare Seizure of N39million Contraband in Two Days 59 Views

The Nigeria Customs Service (NCS) has clarified that the importation of rice into the country is not banned as widely believed, provided the common staple food is channeled through the seaports, and not land borders.

This is to allow the appropriate authorities to collect duties on them as well as facilitate proper documentation for data purposes.

The team leader of the NCS Headquarters Monitoring Team, Idiroko Axis, Deputy Controller Yahaya Usman Biri, while briefing newsmen about the activities of the team in recent past, made the clarification.

According to him, the position of rice importation in the tariff guidelines is not that of absolute prohibition, but that it is strictly restricted to the seaports at a duty and levy of 10% and 60% respectively.

He said the seized rice was suspected of having being ferried through unapproved routes thereby evading duty payment, while the cars may have similarly found their ways into the country illegally.

He added that the rice consignment was loaded in a DAF truck with registration number XS 250 KTU, with two suspects; one Mr. Maruf Bello and Pastor Ajayi Joshua, who were promptly arrested at the point of interception.

He put the Duty Paid Value (DPV) of the rice consignments at three million, nine hundred thousand naira (N3, 900,000.00). The five 2015 Toyota Corolla cars, he said, has a duty paid value of thirty five million, one hundred and fifty four thousand, five hundred naira (35,154,500.00), thus bringing the DPV of the two seizures to thirty nine million, fifty four thousand, five hundred naira (N39,054,500.00).
The first seizure, he explained, was on 31 July 2015 at 0410hrs along the Lagos Shagamu Expressway while on an information patrol. He said his team trailed the product before catching up with them at the said highway.

On the seized brand new vehicles, he maintained that his team shares intelligence with other Customs Units/Commands on ways of effectively blocking smuggling of items that were in total disregard to the fiscal policies of the Federal Government of Nigeria.