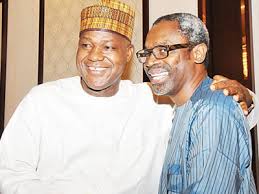 Signs of unity pervaded the atmosphere in the early hours of Thursday morning as members of the All Progressives Congress (APC), for the first time, sat down as a team to pronounce peace between the one-time warring factions.

“There are no more factions in the House. What we have today is a group of lawmakers loyal to the House leadership and our great party,” Speaker Yakubu Dogara said following his gesture of conciliation towards his one-time rival, Rep. Femi Gbajabiamila to whom he conceded the office of House Leader.

His words were echoed by Gbajabiamila, the minority leader in the immediate-past House who has now been transformed into the Majority Leader.

In the meeting in House Room 028, members of the two camps openly reconciled and apologised for the harsh words that had been traded and sought to move the House towards achieving their initial objective of coming to the House.

The peace deal between Speaker Dogara and Gbajabiamila was worked out Tuesday afternoon in the office of the Clerk while many of the House members were in the chambers at a session presided over by the Deputy Speaker Yusuf Lashun from Osun State.

The prospects for peace at the beginning of that Tuesday, however, had not looked promising especially after supporters of Dogara met and resolved to heed the party’s injunction for peace halfway.

In their resolution which they adopted as an amendment of the party’s position, they had resolved that they would take the instructions of the party National Chairman, Chief John Odigie-Oyegun by returning some of those nominated by the party for the principal offices: Ado Doguwa (Kano) for House Leader, Bala Jibrin (Kogi) for Deputy Leader, Pally Iriase (Edo) for Chief Whip and Chike Okafor (Imo) for Deputy Leader.

In adherence to the principle of Federal Character, the Dogara group at their last caucus meeting which ended sometime around 00.30 hours on Tuesday morning had rejected the plea for Gbajabiamila to become House Leader on the premise that his Southwest zone had already produced the deputy speaker of the House.

However, their will was reportedly broken later in the day upon pressures from the Presidency that weighed in for Gbajabiamila to get the position. “From the body language of the President it was obvious he wanted Femi, and we could not go ahead to disparage the wishes of the leader of the party,” a source in the Dogara camp said.

The development caught many of Dogara’s supporters unawares, but it was not as if they were offended, especially as the decision on Tuesday immediately punctured the air of bickering that had characterised relationships on the floor since that decisive leadership contest of June 9, 2015, when Dogara defeated Gbajabiamila narrowly for the speakership.

Rep. Austin Chukwukere (APC), Ideato North/South, Imo State was quick to flay the decision saying their people felt abandoned. “We are not happy over our exclusion and the way the party has abandoned us despite what we passed through during the election to ensure that APC has representation in our place. Our constituents have been calling us over this development, and we have not heard from the party why the injustice should be meted on us,”

The development may also leave the Peoples Democratic Party (PDP) caucus in a quandary. The caucus and indeed, the national leadership of the party had been supportive of Dogara and had rejoiced in the wake of the crisis in the party exploiting the division to foster its own political agenda of decimating the new ruling party.

With the assured unity in the ruling party, the PDP caucus in the House led by Rep. Leo Ogor, one of the most experienced members of the House would now have to ponder new options for political ascendancy.