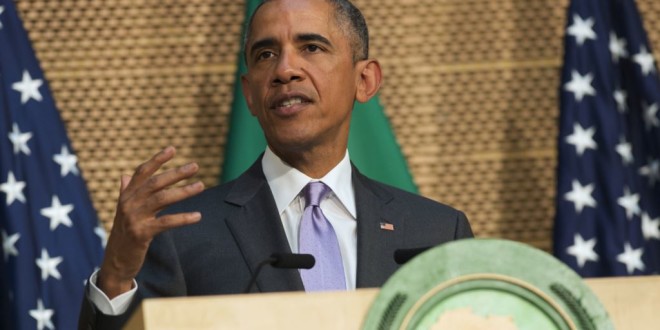 US President Barack Obama has concluded a landmark visit to East Africa by becoming the first American president to address the African Union. Obama highlighted Africa’s need to combat terrorism and corruption.

The US president told African leaders on Tuesday that the US was a “partner” and a “friend” to the continent, adding that progress will “depend on security and peace.

“As Africa stands against terror and conflict, I want you to know the United States stands with you,” Obama said on Tuesday at the AU’s headquarters in Ethiopia’s capital Addis Ababa.

The American president highlighted the threats posed by militant groups usurping the “banner of religion” in Africa, such as al-Shabab in Somalia and Boko Haram in Nigeria.

“Many of these groups claim the banner of religion, but hundreds of millions of African Muslims know that Islam means peace. We must call groups like al Qaeda, ISIL [“Islamic State”], al-Shabab and Boko Haram, we must call them what they are – murderers,” Obama told the African leaders.

Obama’s focus on security recapped meetings and speeches made in Addis Ababa and Nairobi during his historic visit to the East African countries.

However, security wasn’t the only focus of Obama’s speech to the AU. The American president also highlighted the need for democratic transition and non-violent transfers of power, openly condemning recent elections in Burundi.

“Africa’s democratic progress is also at risk when leaders refuse to step aside when their terms end,” Obama said.

“When a leader tries to change the rules in the middle of the game just to stay in office, it risks instability and strife, as we’ve seen in Burundi,” Obama noted, referring to Burundi’s president, Pierre Nkurunziza, who won a controversial third term following a contentious presidential election.

Obama went on to urge African leaders to end “the cancer of corruption” to ensure democratic progress and economic development.

“Nothing will unlock Africa’s economic potential more than ending the cancer of corruption,” Obama said, adding that “only Africans can end corruption in their countries.”

Obama added that Africa’s youth needed to be empowered and educated, focusing on the role women play in society as enactors of progress and economic change.

“The choices made today will shape the trajectory of Africa – and therefore the world – for decades to come,” Obama said.

His landmark speech at the AU wrapped up a historic visit to Kenya and Ethiopia, which witnessed the American president visit his family in Nairobi.