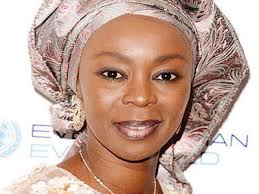 July 26, 2015 Comments Off on EFCC’s Invitation To Saraki’s Wife, Timing Is Suspicious 14 Views

Ahead of the expected appearance of the Wife of the Senate President, Mrs. Toyin Saraki, before the Economic and Financial Crimes Commission (RFCC) on Tuesday, July 28th, members of the House of Representatives have kicked against the timing of the invitation by the anti-graft agency.

In a statement in Abuja Saturday jointly signed by Hon. Umar Buba Jibril, representing Lokoja/Kogi Federal Constituency and Hon. Muhammad Kabiru Ajanah, representing Okehi/Adavi Federal Constituency, both in Kogi State on behalf of unnamed 25 other lawmakers in the Green Chamber, the group described the sudden invitation of Mrs. Saraki by the anti-graft agency as highly suspicious.

The group said while it will continue to encourage the EFCC to carry out its legal mandate, it was optimistic that the highly professional anti-graft body, “will not lend itself as a tool to propagate the political agenda of any person or group.”

It added that it holds strongly that the days of using the EFCC to harass and intimidate political opponents are gone for good, and warned, “We must never return to that dark and dangerous side in our polity.”

The group said it was concerned that the leadership of the National Assembly is being targeted for unnecessary harassment using state institutions.

In the statement titled, “Curious EFCC invitation of Barr. Toyin Saraki,” the lawmakers said: “We the concerned members of the House of Representatives have followed the recent trend of political intrigues since the emergence of Senator Bukola Saraki as the Senate President.

“We are acutely aware that certain power blocs are determined to use any means to mount pressure on the Senate President. It is in light of this that we view the recent sudden invitation of the wife of the Senate President, Barrister Toyin Saraki, by the EFCC with a high degree of suspicion.

“We observe that Senator Bukola Saraki was in office as Governor of Kwara State for eight years from 2003 – 2011. He left that office over four years ago. In this period of 12 years, not once has any mention been made of his wife as being involved in anything untoward. It is therefore very curious timing that this ‘invitation’ by EFCC is suddenly raised.

“We will continue to encourage the EFCC to carry out its legal duties. Indeed, we commend the recent improvement in the Commission’s performance. However, we hope and trust that the EFCC, being a highly professional organization, will not lend itself as a tool to propagate the political agenda of any person or group.

“We believe that the era of using EFCC to harass political officeholders ended with the last administration. We must never return to that dark and dangerous side in our polity. The nation wants a genuine war against corruption. At a time when the President has identified places like the NNPC as a significant source of corruption, to ignore that and try and rake up mud against the wife of a public officer would be most unfortunate.

“We are concerned as members of the Legislature that the leadership of the National Assembly is not subjected to unnecessary harassment using state apparatus as an unwitting tool. We will continue to closely monitor this situation. The Nigerian public are also watching,” the lawmakers said.