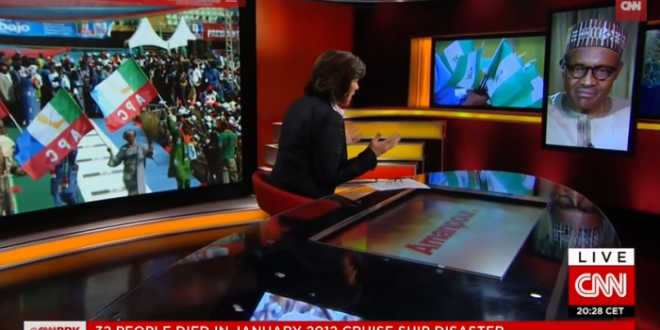 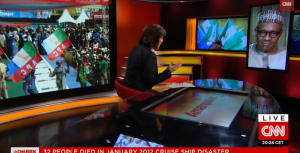 President Muhammadu Buhari said on Tuesday that no corrupt member of his party, the All Progressives Congress (APC) or associates will go scot-free in his anti-graft war.

His critics have always expressed doubt about his anti-corruption crusade, alleging that he is surrounded by corrupt associates who are untouchable.

However, Buhari said in a nine-minutes’ CNN interview with Christine Amanpour that no corrupt member of his party will escape justice.

Asked if he would sanction the guilty ones if they were members of his party or associates, he said: “I just have to. There is not going to be any party member or personality that can escape justice.”

In the interview, Buhari restated his promise to secure the release of the 219 Chibok schoolgirls who have spent more than 460 days in Boko Haram captivity even if it means negotiating with leaders of the insurgency.

The President said he would deliver on his campaign promises, adding that 12 weeks is too early to judge whether or not he has performed.
He also promised to invite President Barack Obama of the US to Nigeria.

Excerpts from the interview:

You have asked the United States to help you in the fight against Boko Haram, what exactly did you ask in this regard and what answer did President Obama give you?
The United States is the one leading the G7 and they promised to do whatever they can to help Nigeria. So we have brought our requirements to them in terms of equipment, training and intelligence gathering for Nigeria to be able to fight Boko Haram.

Nigeria is experiencing falling economy, especially falling oil prices. How are you going to deal with that?

My people want security in the country to be stabilized both in the South-South region where militants are still sabotaging oil installations, kidnapping our people and demanding ransom, and in the North-East of the country where Boko Haram is still active. This is the main pre-occupation of Nigeria now and it seems nothing will work until Nigeria is secured.

Despite your vow that you will fight Boko Haram, over 400 people have been killed since you became President. Added to that, the Amnesty International said your military has totally lost the confidence of the people because of the systematic human rights abuses in killing of some 8,000 people. How do you expect your military to be able to go against Boko Haram and also gain the trust of the people?

I have just mentioned that under Chad Basin Commission, we have agreed to hold a multinational joint task force. So, whatever happened before that decision was taken will help to allow further investigation to verify the question of human rights abuse. I am sure we must admit the decision taken by the Federal Government of Nigeria in changing the military command.

What about the famous Chibok girls? It is being said that they might be traded for Boko Haram members that are in prison right now. Is your government willing to trade those girls in that regard?

So, are you in principle against or will you consider exchanging the Boko Haram members for the Chibok girls, if you can verify the credibility of those leaders of Boko Haram?

I cannot be against it. I told you that our main objective is how to secure the Chibok girls and bring them back to their schools and rehabilitate them to go back to their normal life. If we are convinced that the leadership that presented itself can deliver those girls, we will be ready to negotiate with what they want.

You came on the platform that you will do better than the previous government. You said you will fight corruption, insecurity and economy among others. There have been hundreds killed since you took over, how can you do any better?

I have said I can be held to my promises for the next three years-plus I have ahead of me. I think it’s too early for anybody to pass judgement on my campaign promises.

Part of your campaign promises is to stamp out corruption. If the guilty ones are members of your party or your own associates, will you crack on them too?

I just have to. There is not going to be any party member or personality that can escape justice.

Are you disappointed that President Obama is yet to visit Nigeria?

I would not say I am disappointed; but how I wish he will change his mind and come to Nigeria.

Did you ask him when you met with him and did he say he would?

I asked him and I will send him a formal invitation.

A former dictator of Chad is being tried in Senegal. Do you support that process of trying an accused African leader in Africa than the International Criminal Court?

Whether he is tried in Africa or elsewhere in the world, the important thing is: Let justice be done. Whatever evidence the prosecution have in Senegal, I think they should proceed to make available to the world and prosecute him according to the international laws on human rights.

So you support that process?

I support any process that is based on justice.

How to resolve UNILAG crisis, by Prof Falola