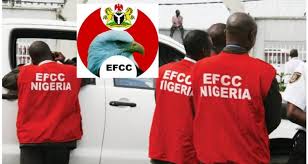 Following an ongoing investigation into the spending of local government funds in Ebonyi State, operatives of the Economic and Financial Crimes Commission (EFCC) has quizzed Mr. Martin Elechi, immediate-past governor of the state.

The former governor, his son and some state government officials who served under him, are being interrogated over a multi-million naira asphalt project awarded to 13 local government areas in the state.
Mr. Wilson Uwujaren, Head of Media and Publicity of EFCC, confirmed in a report on Thursday that the former governor was interrogated by operatives of the anti-graft agency.

“It is true that he was quizzed by operatives of the commission”, Uwujaren said.
Findings have revealed that Elechi was invited to the EFCC’s headquarters to face a team of operatives on Monday and Tuesday last week.
He was said to have faced the panel of investigators from the Economic Governance Unit of EFCC for two days at the commission’s headquarters.

“He was not detained; he appeared on Monday and he was only asked to appear again on Tuesday after which he was asked to go on self-recognition.

“The commission is looking into the award of some asphalt projects approved for 13 local government areas in the state, which were not executed in seven of the local government areas.
“It is an ongoing investigation. You remember that in January, some commissioners were quizzed in relation to the controversial projects and later, the governor’s son, Nnana, whose company was alleged to have handled the project, was quizzed.

“In fact, the son has been coming to the EFCC office even before his father left office. Now, the father too has been quizzed and the event is unfolding; it is a build-up.”

Share
Previous US: 5 Dead, Including Gunman, In Tennessee Military Shootings
Next Greek Bailout: Banks To Re-open ‘Gradually’ On Monday