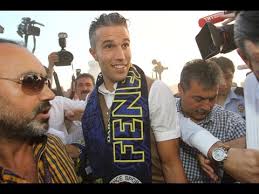 Dutch international striker Robin Van Persie was Sunday given a hero’s welcome by fans as he arrived in Istanbul to join Turkish football giant Fenerbache on an eagerly-awaited transfer from Manchester United.

Van Persie landed at Sabiha Gokcen airport at the Asian side of Istanbul after flying in on a private jet and was given a typically rowdy reception by hundreds of supporters clad in the yellow and navy blue colours of the club.

Accompanied by his wife Bouchra Elbali and their two children, he walked out of the airport into a cacophony of chanting from supporters with the air thick with smoke from flares lit by the fans.
Apparently unfazed by the scenes, he squeezed his way through the crowds of fans and photographers to begin his new life in Turkey.

In a sign of his importance for the club, his entire arrival was covered live on the club’s in-house TV channel Fenerbahce TV from the landing of the plane through passport control.