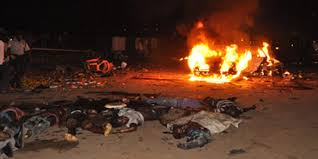 Boko Haram: Many Feared Killed In Twin Blasts In Jos Near Mosque, Restaurant

July 6, 2015 Comments Off on Boko Haram: Many Feared Killed In Twin Blasts In Jos Near Mosque, Restaurant 25 Views 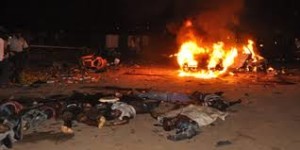 Twin explosions rocked Jos, the Plateau State capital Sunday evening and as yet unascertained number of people have been killed, and others injured.

One eyewitness said, “The first explosion went off at about 9:14pm at a Bauchi road shopping complex a few meters to the Bauchi Park and University of Jos and the second explosion was heard about four minutes later.”

The first explosion went off at a popular food seller’s shop known as Hajiya Talatu. The witness added that some private vehicles conveyed the dead and injured to hospitals in the city.

The second explosion was said to have occurred close to the popular Yan Taya Mosque where Sheikh Sani Yahaya Jingir says his Ramadan tafsir.

Another resident, Godwin Okoko said, “Twin bomb blasts occurred in Jos North LGA killing several people even though the casualty figure is not yet ascertained.

“The first bomb exploded at Yan taya mosque during prayers and the second near Hajiya Talatu Mai Abinchi a popular eating spot on Bauchi road.”

He condemned the act saying, “This is sad, barbaric during a Holy Period” and called for effective community policing to curb the trend.