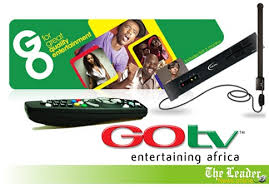 GOtv has said that its coverage in Edo State received a boost recently with its signals now reaching Auchi, Aviele, Ewu, Igarra, Jattu and Okpella.
The development, according to the company, is in continuous support of the digital migration in Nigeria.
Mr. Efe Obiomah, Public Relations Manager, GOtv, who expressed delight over the company’s decision to take GOtv beyond big cities to the hinterlands, noted that GOtv first made an entry into Edo State when it was launched in Benin, the state capital.
Obiomah said the move further demonstrates GOtv’s commitment to enable Nigeria achieve a speedy migration from analogue to digital broadcasting.
She said, “Africa Independent Television (AIT) is of great significance to the people of Auchi and its environs. Afemai/Etsako people can now access AIT on GOtv and enjoy news and cultural programmes in digital pictures and sound. This is in addition to the wide variety of family entertainment on GOtv.
“In the month of July, GOtv celebrates African music talent with the live broadcast of the MTV Africa Music Awards 2015 on GOtv. Subscribers can also look forward to the Season 2 premiere of I Survived on Sony Entertainment Television as well as the premiere of a new series on Telemundo, Husband for Hire.”
GOtv offers two bouquets: GOtv Plus for a monthly subscription of N1,800 and GOtv Value for N1,200 monthly and both bouquets give families a good selection of international and local channels with 42 channels on the GOtv Plus bouquet, and 28 channels on GOtv Value.