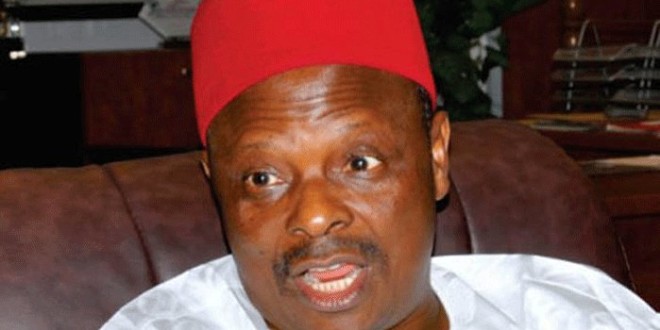 Senator Rabiu Musa Kwankwaso, immediate-past governor of Kano State, in this interview with newsmen in Abuja gives his views on the crisis arising from the National Assembly leadership contest. Excerpts:

Were you one of the APC senators waiting at the ICC when the leadership contest started in the National Assembly?

Honestly speaking, it was on the morning of that day that I saw a text message that we should go to the ICC. Unfortunately for me, I had so many people who came from Kano. I was trying to receive them all when I got a call that members and senators were waiting at the ICC. As I was moving out of Hilton Hotel, somebody called again that they were at the National Assembly and were just about to start election. So I diverted the driver; now that election was taking place, I said instead of going to ICC, it was more important for me to go the National Assembly. And in any case, I was sure that those who were at the ICC will not want to stay there when election was taking place. So I drove straight to the National Assembly, moved straight to the chamber.   It was when I entered that I saw Bukola being sworn in as Senate President.   So I wasn’t at the ICC, I was at the National Assembly; but I arrived after the election and I was there calling them to come. Unfortunately, they didn’t come; so I had to follow them to ICC and other places. That was what happened that day.

Did President Buhari summon that meeting?

Nobody told me; but I saw a text message that we were going to be addressed by the President. But the message did not come from the President himself, but from the officials of the party.

Did you suspect mischief by the party leaders?

I told you the party missed some vital steps and gave ample opportunity to the Bukola group and they used it effectively using all the advantages that had to do with the mistakes of our leaders. One, I am aware that the G-7 group and their supporters were interested in seeing one of them being relevant. I am aware of that group within the APC. I am also aware that there are some people within the party who also believe that my brother, Senator Bola Tinubu has taken so many things and they thought it was time for them to put a brake so that he does not have to go with that election because they have the perception that Tinubu was supporting another candidate. There are other groups of senators who believe that Bukola had given them so many things, they believe he supported them in the party, maybe he had taken advantage of some supporters of the party who channelled a lot of support through him and many senators believe they were supported by him and therefore went all out to support him. All these things were not taken into consideration by the party leaders. There were many other senators and members that very much believe that the consultation between them and the party was not good enough, that the party could have done more in terms of the relationship in terms of closeness and even in terms of letting them know precisely the direction of the party. Some of these things are correctable like making consultations with members of the National Assembly etc. I’m sure you know that I’m in the group of Ahmad Lawan and Akume; but before then, I was one of the supporters of Akume because under normal circumstances, he should get the seat. He is the natural owner of the seat for many obvious reasons. One, he is probably the most senior among all of them; he was the minority leader and I have not heard anybody pass a vote of no confidence in him. Now that the party is the majority party, under normal circumstances, he should have been Senate President. His state did very well for the party and all these put together qualify him to be the Senate President. I supported him from the beginning; but when the decision was made by some other people that two of them should come together, in fact, he called me 4 a.m.one day. I was in Kano. He said this was what was happening in Abuja; what is my opinion because he doesn’t want to do anything that will go against our collective interest. It is sad that they didn’t get it because under normal circumstances all members of our party should toe the party line, that is how it should be. But here we are with the situation where the party is on one side and some members of the party are on the other side.

So are you saying the party is divided?

The party unfortunately is divided, but it is not too late to correct many things. The party should take certain steps to ensure such things do not happen again. I am one of those who advised Bukola that he shouldn’t go too far with that ambition under the circumstances. At his level,  people should be more careful and cautious in what they do and what they don’t do, especially as the situation is even worse than the case of Tambuwal. During the 2011 elections, the Tambuwal case was a case of going out of the zoning; but all the positions went to the members of the party. But this time, because of the ambition of these members of our party, they went and connived with people who are not only opponents but enemies of the party to fight the party after the people of this country have discarded these people. Now because of ambition, these people were made relevant. I don’t think that is the best way to go. Members of the party should have limitations, they should know where to start and stop. This is going too far romancing members of the PDP. As far as we are concerned, PDP was dead, until recently when ambition brought certain people to do what they should not do in a democracy and party politics. Now, we are about to create another line for them to the extent that some of them are surfacing again and making all sorts of statements. Just yesterday, I was reading Ekweremadu talking rubbish, saying they have reason to speak again and this has to do with the mistake of our own members. I believe at the end of the day, the party members must get a way of coming together and behave well. That is the only way we can make progress.

Some have justified Ekweremadu’s emergence as compensation for the South-East?

There are ways APC can carry the South-east by way of appointment. I’m sure our party had it in mind to carry the South-east but not with the position of the Deputy Senate President. That position doesn’t belong to the PDP and that is the mistake Ekweremadu is making. He said he was elected deputy senate president, yet he reduced himself to a zone and to a tribe which is not good enough.